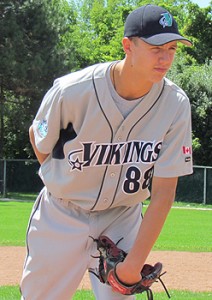 When Christian Botter was 4 years old and his father would take him to soccer practice, he wouldn’t get out of the car.

Roy Botter was perplexed as to what might be the right sport for his son. As an athletics experiment that same year he also enrolled him in baseball.

“Baseball, there were no issues,” Roy recalls today. “He’d go to practice, games; with soccer I had to drag him.

“The next year’s debate was easy: we didn’t have to play soccer — we played baseball.”

Ask the now-16-year-old pitcher to a give reason why he preferred heaters over headers, he shrugs it off.

“I just didn’t like it,” Christian says of soccer, adding that once he hit the diamond his dad taught him more about a sport that would soon envelope his life like leather around a can-o-corn.

Playing for a dozen years now, he has developed into a strong starting pitcher.

“From almost day one it was throwing in the back yard, throw in the park, throw with the team,” Roy said. “I could see that he had a good arm, he liked the game and it just kept going from there.”

With his hard work, Christian has won a national title with the Major Bantam rep team, won MVP for his high school, St. Joan of Arc, and joined Toronto Mets U16 squad.

This summer has been non-stop baseball, with trips to Buffalo, Northville, Mich. and Pittsburgh.

All that tromping through baseball country may just transpire into post-secondary pursuits.

“I’m hoping to get a scholarship for school so I can become a teacher,” Christian said. “If my baseball takes me farther, that’s better.”

In his repertoire, he’s got a fastball, a two-seam, 2/7 curveball and a change-up. It’s the latter he wishes to improve on over the course of his Toronto Mets and Vaughan Vikings career.

And Christian knows it’s not going to happen all at once — much like making the jump to the majors after high school.