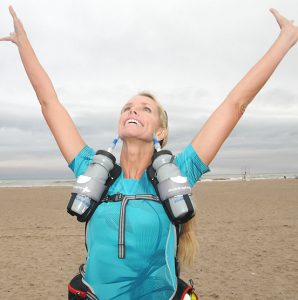 Marathon addict Alison Simpson is going to see for miles.

The Beacher is training hard for a 250-kilometre test of endurance across the Sahara Oct. 1–7. It’s a challenge that will see temperatures reach 40 to 50 degrees Celsius and add an 11-kilogram pack to her sweltering run.

After 29 races in cities around the globe, Simpson’s reason to tackle sand dunes was two-fold: face a new challenge, and raise money for a charity close to her heart.

“It was a completely emotional decision,” she noted. “I said, ‘Sign me up’, because it was at the point where I love to run, but I was getting a little complacent and bored with marathons.

“I thought I needed a big, hairy challenge. I need something new to keep me inspired and training.”

The emotion came from the 46-year-old’s vocation. The advertising and marketing industry has seen plenty of layoffs, and the charity Simpson has raised over $11,000 for, the National Advertising Benevolence Society, helps aid those left without jobs.

The society also supports people are fighting a serious illness and lack the financial resources to support themselves in addition to seeking new employment.

Knowing that she’s helping out colleagues is the gas in her inspiration tank.

“The marathon is going to be hell — part of the time at least,” she said. “(But) knowing that it’s temporary versus fighting a serious illness or really struggling to get on your feet after losing a job … that will absolutely fuel me through some of the worst parts of the race.”

Simpson flies to Egypt on Sept. 29, and will start the race 7 a.m. Oct. 2 through the Valley of the Whales. All marathoners will race 40 kilometres for each of the first four days, and then 80 on the fifth day. The final leg of the race is 10 kilometres. The finish line will have a spectacular backdrop: the Pyramids of Giza.

Waiting there for Simpson will be her husband, David Dawson, who avoided signing up for this journey.

“He thinks I’m nuts, and he’s much smarter than me for not signing up for it,” she said. “But he also knows I am someone when I set my mind on something I’m going to accomplish it.

“Here’s hoping he’s right with that.”