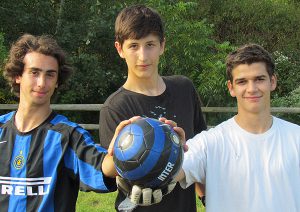 Tier 2 championships the goal for soccer side

The folding of the boys volleyball team is not an omen of things to come for Rosedale Heights sports.

After a 12-year hiatus from the net, the efforts of alumnus Danny Mucci and former coach Doug Hanes brought the sport back last year.

However, this year phys ed head Lynda Dalzell said the appeal could not be kept aloft.

“They had tryouts and there just weren’t enough guys to make a team,” she said, adding disappointment was prevalent. “I thought after last year there would be a lot more interest but it turns out there’s not.”

Where the Ravens have seen loss, they’ve also seen gain, as their boys varsity soccer team has seen an increase in students trying out, said coach Hovig Keshishian.

“We had 22 players come out so we should be a little bit stronger because last year our team was made up of mostly grade 10s,” he said.

With the addition of rookie Husayn Jessa, Keshishian is confident his charges will make as the crow flies directly to the Tier 2 championship in late autumn.

During that same time, another Raven season will start afire, as senior girls volleyball tryouts are set.

“The girls I’m excited about for sure,” Dalzell said. “We had a lot of promising juniors move up to senior.

“And I still have at least half of my senior team from last year.”

The junior making the jump to the senior six-pack is Jamila Noritz-Reyes.

Rosedale is also looking forward to spring, as girls soccer starts up. That squad will feature returning seniors Paige Krossing and Lexie Donaldson. Joining them is rookie Isabella Campbell.

For the time being though, Keshishian is preparing his boys for the opener against Ursula Franklin Academy.