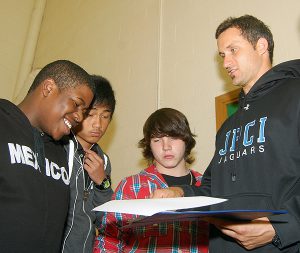 Walking into John Polanyi CI’s gym is like walking into an open house, it’s not quite home, but there’s a hint of what it could become.

The remnants of Bathurst Heights Secondary School are still apparent as the bear mascot adorns centre-court and the keys are the former school’s kelly green.

The Jaguars, a team name chosen in a vote of 180 Sir Sandford Fleming students before the school closed, will don the North Carolina Tarheels’ powder blue, black and white.

“I looked into that and a lot of the names are repeated,” Harvey said the night before over a phone interview. “The Jaguars is one of the seldom used.

However, the costs associated with resurfacing the court with powder blue keys and jaguar emblem cause Harvey some concern as illustrated by the furrow in his brow.
468x60banner

But Harvey will return to that concern once settled into new digs. The athletic department has seen a grade 9 student body that’s almost tripled its size. Without the help of Shannon Burnie, the girls phys ed rep who’s on maternity leave, there will be gaps to be filled.

“That actually poses a challenge for myself as the department head of athletics,” he said. “We’re going through an interview process to find out who a replacement will be.”

With all these problems to be solved, one would think Harvey has limited time for optimism.

Quite the contrary as tryouts for the girls basketball and boys junior football have garnered promise.

“I think overall it’s pretty exciting,” he said. “We’re trying to build up our programs to add more sports teams.

“We’re looking to add more sports teams that we haven’t had before, perhaps with student interest, our weight room facilities have had a lot of improvement.”

The junior girls saw 20 students tryout, and 15 were chosen.

“I think our biggest surprise this year will be our junior girls basketball from what I’ve seen,” Harvey said. “We have a lot of good athletic girls and tall girls, which rarely happens.”

About 30 boys will suit up on the gridiron. It will be the first time in a while Harvey and co-coach Geoff Sura will return to the sidelines as Fleming cancelled their squad last season.

“We had a team that I started four years ago at junior and we were senior in two years, won a championship in the varsity league,” said Harvey. “And then we had to cancel the team last year because there wasn’t enough kids.”

Though there will be a learning curve, the future is looking bright for the current Jaguar cubs.

“Our population is up significantly in the junior grades, which hopefully will continue and then we get to the population that we hope to have,” Harvey said. “What it’s going to mean down the road in terms of our athletes is … more competitive.”