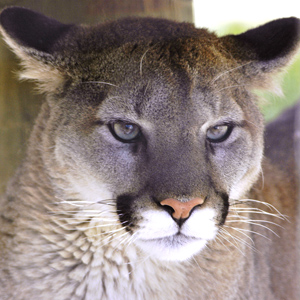 Is the greening of Toronto’s urban landscape a welcome mat for cougars looking to repatriate themselves in Southern Ontario?

U of T zoology professor Mart Gross seems to think so.

The re-establishment of natural habitats in the city has brought many species back, including cormorants and coyotes.

“There’s a great example because it’s highlighted as Toronto’s urban wilderness park,” Gross said. “One of the consequences, though, is there are over 400 species now on that land stretching out into Lake Ontario, including coyotes.”

The wily canines that have been found in the park have been tagged with electronic collars, he said, and have turned up in Hamilton and as far away as Georgian Bay.

And the coyote is proof positive that a cougar could infiltrate Toronto by travelling through the Don Valley.

“It wouldn’t be surprising one day that a cougar could follow such a corridor feeding on such things as coyotes, rabbits,” Gross said.

In the past couple of years, reported sightings have come from North Bay, Port Colborne, Niagara Falls and Pickering.

The eastern cougar was originally a native species to Ontario but has not been seen since one was shot outside of Barrie in 1884.

He said the sightings have been occurring for 15 years along the Pickering-Scarborough border and the provincial Ministry of Natural Resources has recently come in to investigate.

“I know they have been working on this with their research people in the field,” Rapley said. “The problem with the cougar is you’ve really got to see it.

“But if you can set up the bait at night in an area where you think it is, you can put an infrared on it that is triggered by motion,” he added. “Then you get a picture and you can prove it.

“If they find hair or scat, they can do the DNA and prove what’s going on.”

Without tangible evidence, though, the large cat is as elusive as England’s infamous Beast of Bodmin Moor, said Nathalie Karvonen, executive director of the Toronto Wildlife Centre.

Although she said the idea of a cougar is plausible, it involves a lot of “what ifs”.

“The discussion over the years with representatives from other organizations is it’s certainly possible,” she said. “An area like the Rouge could sustain a cougar because they would certainly enjoy feeding on white-tailed deer and other animals, but who knows if there actually is one there.”

The centre receives 30,000 calls a year on everything from snakes to coyotes being mistaken for wolves, but only one or two cougar sightings.

And if there is a wildcat lurking in the greenery, Karvonen said it would be worse if the animal were an escaped pet.

“Typically, wild animals that have been kept as pets are not psychologically healthy,” she said. “If they have had a period of time with people, they tend to be less afraid of people than a number of species that have limited contact.”

She pointed to Toronto’s large raccoon population as an example of fearlessness.

“You can get pretty close to them before they have any concern at all,” she said. “A raccoon that’s a true raccoon up in the middle of Algonquin Park or in remote cottage areas, if they see a person, they run screaming in the other direction.

“If somebody has a pet raccoon and lets it go, once it reaches sexual maturity, it behaves a little more like a wild animal but it still doesn’t fear people.”

Urban vermin aside, Gross said he welcomes cougar repatriation, noting animals have to adapt to humans in order to survive our voracious appetite for resources.

“If we had some natural predators, we could establish an ecological community (in Tommy Thompson Park),” he said. “It will function and work on its own.

“No cormorant would have to fear getting a bullet in its head, but it has to fear a cougar coming and eating its young.”

“I certainly don’t think people should start to panic,” she said. “At the end of the day, we’re still at greater risk from each other, cars, dogs: there’s a lot more in life that we could encounter than this cougar.”