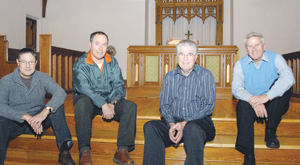 For Leaside United Church an 80th anniversary is something to sing about.

That’s why the Bayview and Millwood area congregation will host a fundraising dinner with the University of Toronto Gospel Choir on Nov. 15, before capping off celebrations with a special sermon by one of the church’s former ministers Judith Evenden Nov. 23.

And the gentleman responsible for bringing the entertainment is no stranger to Leaside either. Volunteer George Hurst has been attending the church since 1967, and has seen plenty of changes.

“Back in those days, we probably had 500 families. At periods of time we had two services on Sunday,” he said. “But that is the big change that has come about — the younger families have so many other distractions these days that it’s difficult to get (them) involved.”

The church’s council puts together an anniversary dinner annually, and this year is no different, save for its eight decades of being a touchstone for the community.

Fraser Holman, chair of the church council, said he hopes to attract 150 people to the dinner, and hopes to raise money for two side projects the church is working on.

“It’s a good combination of having a nice dinner, a nice fellowship opportunity with a little entertainment and put a little bit of money into our budget, which is running in chronic deficit,” he said.

Money raised will go to furnishing four rooms at the Ina Grafton Gage Home, a senior’s residence near Pape Ave. and O’Connor Dr., and create a spiritual maze garden on the church’s grounds.

“It’ll be very joyful because 80 years is quite a mark,” she said. “So we will definitely be in the spirit of celebration with Leaside that night.”

The choir is “very big on supporting churches and their endeavours,”” she added.

And the choir’s mixed repertoire is adaptable to any music enthusiast’s needs.

“We make sure we have a repertoire that is appropriate for all occasions, and for every environment we’re asked to sing in,” Toussaint said, adding she’ll speak with the organizers to “get an idea of what their occasion is about, what their expectation is, and then just sort of build the concert around that”.

Although Hurst is modest about the church’s 80th anniversary, he is looking forward to the evening of celebration.

“It may not be as elaborate as our 75th, we’re nevertheless obviously pleased to be doing something for sure.”