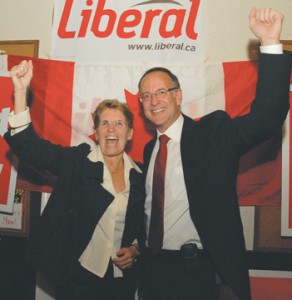 By Brian Baker and Karolyn Coorsh

Rob Oliphant started his political career as a young Liberal canvassing to send Pierre Trudeau to Ottawa. After a victory in Don Valley West, Oliphant will follow his late mentor’s path to the House of Commons.

The Oct. 14 federal election culminated in a comfortable win for the first-time politician, who arrived at a Laird Dr. pub amid raucous cheers from supporters and well-wishers.

Throughout the night, TV monitors with election results showed a consistent lead for the United Church minister.

Oliphant told the Town Crier that as a Liberal MP he plans to take the Conservatives to task.

“If Mr. Harper doesn’t do what the majority of Canadians want we’ll be back at the polls,” he said, “because they’ve not given him a full strong mandate, they’ve given him a very modest and guarded mandate, so we’ll be there.”

After thanking family and friends, Oliphant addressed the constituents of Don Valley West in his victory speech, touching briefly on issues he hopes to focus on as MP, including child care, poverty, the environment and immigration.

The 52-year-old is taking the reins from former Liberal MP John Godfrey, who stepped down in June.

The current headmaster of the Toronto French School was on hand to celebrate Oliphant’s victory.

“It’s good news for the riding because he’s a good guy,” he told the <em>Town Crier</em>, as polls results started to pour in. Godfrey also praised Oliphant’s work as a church minister.

“Rob’s in one of the caring professions and you’ll find that these are transferable skills.”

At Carmichael’s headquarters, located at a Leslie St. banquet hall, the mood was victorious even though the Conservative conceded defeat around 11:15 p.m., nearly two hours after the polls closed.

With no incumbent in the riding, pundits said Carmichael was one of a few Conservative candidates with the potential to break into Toronto’s mostly Liberal territory. He was successful in narrowing the gap between his party and the Grits by five-and-a-half percent over the 2006 election result.

Speaking to a crowd of supporters, Carmichael thanked family and friends for their help in the election, saying, “We fought what I think was a really high-level, high-road campaign.”

He said he was pleased to see the Conservatives gain ground in other parts of the country. The federal campaign was about leadership, he said.

“Let’s make no mistake about it, it was about the leadership of Prime Minister Stephen Harper. … I’m only sorry I’m not going to be there to work with him.”

The businessman, who is running for the second time in Don Valley West, said it was too early to say if he’d run again.

“We’ll just wait to see what unfolds,” he said, adding for now it’s back to the day job.

Several hopefuls had already begun campaigning in earnest for a scheduled Sept. 22 byelection when the writ was dropped for the general election on Sept. 7.