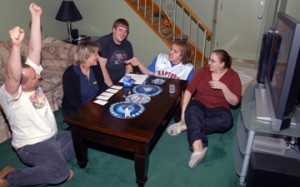 Parents of bored children need not put family time on pause, as the popular trend in game design is getting digital.

Good old-fashioned pastimes like Monopoly, Trivial Pursuit and Clue are jumping off the board and onto the television screen, a move that is revitalizing how parents and children spend their time together.

For children who have grown up with the Internet, console video games and MP3 players, older forms of entertainment just don’t cut it. The technological disconnect between generations is gradually being bridged by a progression of the real world and the electronic one.

And, according to sociology doctoral candidate Tracy Kennedy of the University of Toronto, that shift to digital is far from being a bad thing.

“I think that the move of these board games to electronic format, whether as a video game or DVD, is an important move,” she says in an electronic correspondence. “Kids today are the digital natives. If you want to keep kids interested, digitalizing is the way to go.”

But where does that leave the parents who are all thumbs with technology?

In search of common ground between themselves and their child, which is important to strengthening the relationship, Kennedy says.

And she doesn’t just say that from a university lab. She plays it out in real time. A mother of an avid gamer, she says her willingness in learning to play various types of games has helped her relationship with her son, as they have a lot of fun together.

“I really think I would be missing out on a lot of time spent with him if I chose not to game,” she says. “It’s hard enough raising a teenager, but I imagine it would be twice as hard if we didn’t have a leisure activity that we both enjoyed playing together.”

This same sentiment is shared in the Morin household, where Kristle and her family play DVD games on a weekly basis.

“Randomly with the family we’ll just break out a game,” she laughs on the phone, adding her mother started the tradition after reading about the games in a magazine. “And the addiction took over and (mom) kept buying them.”

Now with a library of 11 games — including Clue, Jeopardy, eight Scene Its and Kristle’s favourite, Trivial Pursuit — the family whoops it up and bonds over trivia.

Those DVD games have even sucked in her critical brother, who says he hates the traditional ones.

“We never play Scrabble or anything like that with the family, because (my brother) sucks,” she chuckles. “He’s always saying, ‘Let’s break out the sports Scene It’.”

And Kristle is okay with that, saying there is always going to be a question in every game — even the sports one — that everyone can answer.

“I’m not the best person when you get to the college football kind of stuff, but it’s not about the names of the players,” she says.

Other themes included in her collection of Scene It games are Disney, the Deluxe Movie Edition and Pop Culture.

According to the company’s game buyer, Audrey Sproul, Scene It Deluxe Movie 2nd Edition is a popular purchase for those looking for DVD games at Calendar Club.

But, she adds, the games have yet to corner the market. According to company statistics, the top-selling DVD game, Deal or No Deal, was ranked 52 overall on game purchases. The highest ranked Scene It was 61 overall.

“I was actually surprised that DVD games are not as popular as we think they are,” Sproul says. “The number of units (sold) is still pretty good with some of our other games, but they’re still not as popular.”

That may seem to be a poor grade, but the DVD format does have some stiff competition, not only from the traditional board games like Monopoly, Clue and Sorry, but from novelties such as the Rubik’s cube, jigsaw puzzles and Scrabble.

Though the non-digital games are not the most popular in terms of units sold, the games are still a hit with many consumers, and a source of family bonding for Morin.