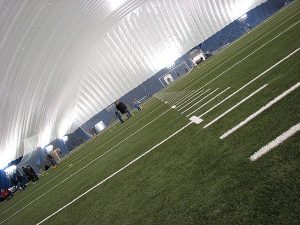 Homelessness the cause of 15 year losing streak?

It truly was a god-awful sight to behold when students would walk past Varsity Stadium’s deteriorating façade.

Thankfully, it received a facelift, a la Joan Rivers, and is now named the Varsity Centre – a year-round sports venue – in hopes that the Blues will actually win a game.

According to historical records, dug up in a dusty office far from the eyes of students, the original stadium was host to 30 Grey Cups. That is a historical football fact. Not a lot of students realize that U of T actually has a football team, let alone a football stadium for that matter.

With the Varsity Blues experiencing so many lopsided losses to the rest of the Canadian Interuniversity Athletics Union’s (CIAU) football teams – losing 70-1 to Western at the beginning of the 2005-06 season – student apathy in the historical Varsity Blues is at an oblivious high.

I spent five years at the University of Toronto and what was common when speaking about the university’s pigskin anti-heroes was by how much they could lose by – a fact that has not changed as of recent either.

The only monumental victory the Varsity Blues have had as of late was off the field in a court case against Paramount Pictures, suing the film company for defamation of character after the release of the Cinderella-inspired high school film Varsity Blues.

But there is hope on the horizon with the recent revamping of the home field.

Will the Varsity Blues, who have played their home games at Birchmount Stadium, start winning like they did back in 1993 when they were believe it or not Vanier Cup winners?

It is quite possible, since the National Football League’s own New Orleans Saints experienced homelessness in 2005, due to Hurricane Katrina’s growth spurt in the Gulf of Mexico.

Being without the Louisiana Superdome left the team with a 3-13 record — still better than anything the perpetually homeless Blues could muster. The Saints have the distinction of making it to the NFC Finals against Lovie Smith and his Chicago Bears.

Let’s hope the same can happen for the Varsity Blues who have a new lease on life, as U of T spent $61.7 million for the entire Varsity Centre, which begs the question, was the project spurred on by the Royal Ontario Museum’s own facelift?

The entire Bloor Street block from Spadina to Queen’s Park Circle has been bustling with construction and renovation projects. The street is already miring for drivers who plan to visit the stores located in the fashionable Yorkville area.

Since my departure in 2003, the University of Toronto has quickly disassembled the last vestiges of Victorian period education in favour of boxy modern architecture.

The University of Toronto is building, but none of the projects will have as much of a morale impact on the St. George campus as the Varsity Centre, because one can only hope that the Varsity Blues actually win a game in their new home.

I wish Coach Steve Howlett all the best on that endeavor.