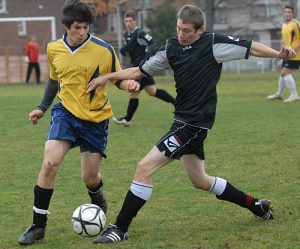 It took sudden death to determine the fate of the Forest Hill Falcons in quarter-final soccer action.

The senior boys prevailed over threats of an untimely ousting 2-1 at Brockton Stadium Oct. 29, on a field rife with goose droppings and a hardened Malvern Black Knights squad.

Falcons coach Mihai Sinevici was ecstatic with the outcome.

“Soccer is cruel most of the time,” he said. “Only in soccer can you have a better team and lose to a weaker team.

“I’m not saying we were a weaker team, but I think (the Black Knights) were a little bit more skilled,” he added. “We put more effort in there, had more will, and I think that was the determining factor.”

In the first half, the ball bounded to and fro, barely leaving midfield.

Still, Forest Hill’s standout for the first 30 was goalkeeper Steve Blokhin, turning away every shot, including a bullet from Sam Moody.

The end result was a match tied at goose eggs by the half.

In the second, Forest Hill broke out, getting a lucky break in Malvern’s zone.

A handball in the penalty area by a Black Knights defender led to a penalty kick and subsequent goal by Jurgen Kela. On that same play, Black Knights netminder Jesse Stark was issued a yellow card for unsportsmanlike conduct.

Later, Forest Hill’s Elvis Como took a shot on Stark that somehow squirted out of his grasp, garnering a collective “Oh!” from fans with no goal in sight.

Another handball in the penalty area against Forest Hill in the last seconds gave Malvern the opportunity to tie the game at twigs.

Moody did not disappoint, knocking the penalty kick past Blokhin.

In extra time, neither team could solve the other’s tight defences, so more penalty kicks ensued.

It was the point in the game that had the Black Knights looking to man the ramparts, said coach Ross Evans.

“I thought both teams played pretty hard,” he said. “I thought we had our opportunities in the second half because we sure outshot them a lot.

“We just couldn’t bag it at the end.”

Penalty shots solved nothing, as both teams went four for five.

But in sudden death play, Forest Hill’s Maxi Alaniz notched the winner when Luke Mollet’s shot was knocked away by Blokhin.

For the Falcons, Sinevici praised a team he’s seen grow.

“Most of them are grade 12s and I have had them since grade 9,” he said. “It’s a four-year cycle and in my five years at Forest Hill, this is the best team I have ever had.

“Not only skill-wise, but they listen and they apply what I ask them to,” he added. “That’s every coach’s or teacher’s dream.”

Amid the post-game celebration, Sinevici was unaware the Lawrence Park Panthers ousted Western Technical in the day’s other quarter-final, but he was confident his grass-stained crew would be ready for their next match Nov. 2.

“Whoever it will be, it will be our first semifinals in five years and we’ll put everything into it to win.”