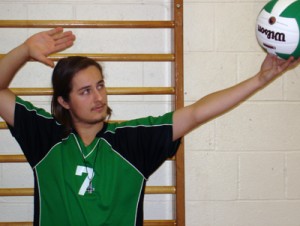 Danny Mucci is an agent of change.

The grade 12 Rosedale Heights student has helped resurrect boys volleyball from a dozen-year hiatus at his school.

Not only that, but he spikes the stigma that arts schools don’t have athletic talent.

“Just because we’re an arts-based school doesn’t mean there aren’t athletes coming into it,” he said. “I don’t think people are very aware of that.

“There is this talent coming into the school but it just never gets to be actually harnessed and used to its full potential.”

“Really the biggest reason is the school is unique,” Hanes said. “The population is two-to-one. There are two girls for every boy.”

The outgoing Mucci is always up for a challenge.

As a former member of the Eastern Nationals youth team, Toronto Crush, he took on the role of mentor on a squad of 15, nine of which were ninth graders.

“Because he was the only kid who had any real volleyball experience, Mucci was important because he helped me teach skills to the other kids,” Hanes said. “We had some of the most athletic kids in the school, but they had absolutely no skill.

“He helped to bring the level of the players up.”

As the dominant player, and as setter, Mucci had more court space.

“To win you have to have your best players handle the ball more so I would ask Danny to cover the floor more in passing,” Hanes said. “He would have to take half of the court on his own and two or three other kids would take the other half.”

More focus meant other teams were reticent to send the ball in his direction.

“It was a good challenge,” Mucci said. “It made me step back and realize it’s not all about smashing the ball as hard as you can, you have to be using your head on the court.”

Though Rosedale came out of their return season without a win, the knowledge gained by Mucci will help him hone his skills at the college level as he vies for a spot at Fanshawe’s Music Arts Program.

It’s a prestigious program, but Mucci is game after the extra conditioning.

“The only difficulty there is only 10 out 100 kids get in just from high school,” he said. “But there’s no reason why I shouldn’t get in.”

The outgoing Raven is sure to strike the chord with Fanshawe Falcons’ volleyball crew as a libero, and prove arts and sports can co-exist.

“I have no doubt in my mind that Rosedale will become a highly competitive volleyball school within the next two or three years,” he said.