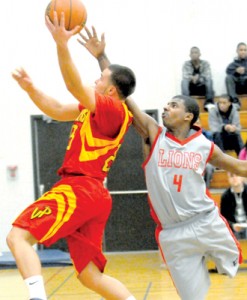 Victoria Park had an appetite for destruction during their senior boys basketball game against George S. Henry Nov. 25.

They took a 21-point deficit at halftime and turned it into an all-you-can-eat Lions buffet in the third quarter, said guard Klei Laze.

“We had to find that hunger,” he said. “That’s when we realized the hungrier we were to win, that’s what’s going to get us that win.”

The result was resuscitation. Once the third quarter commenced, Victoria Park went on a 13-0 tear against a stunned Lions pride, bringing what was a 31-10 score closer.

Henry coach Scott Davidson said the break down was related to his charges’ overconfidence.

“We just came out shooting cold,” Davidson said. “They were so hyped up after the first half, they were acting like it was done.

“Basketball success is not prominent at this school so they got really excited.”

Forward Chavon Bennett, scoring 16 points, was subdued, but admitted the Lions were surprised when they were outscored 19-3 in third. They lost the game in overtime, 56-52.

“We pushed back,” he said. “But they played a good defensive game.”

Playing in front of a boisterous Henry crowd, Laze certainly didn’t endear himself to the fans, as every time he touched the ball he would be met with a chorus of boos.

But the cacophony was all but white noise to the point guard.

“For me, in the back of my head I just put it (as) I’m the only one on the court and my teammates,” he said. “I don’t really see the crowd.”

The ability to shut out the crowd was what led to a pivotal moment for Vic Park as they tied the game up in the final minute of play.

Panthers coach John Castor called a timeout with 1:25 left in the fourth. The score was 48-41 Lions. Afterward, Panthers Rashid Nacro picked up a deuce. Then Hamidou Ongoiba grabbed an o-board and tipped in another deuce.

With the Panthers attacking, the Lions paused the game at 1:09.

A key steal by Vic Park’s Wesley Cook, feeding it to Laze with the foul was the mark that sent the game to overtime.

“Seeing that I was going crazy,” Castor said. “I was just very, very hyped after that.”

“We all came together as a team and pulled off the win,” he said. “We just had to play more defence and pressure the ball.”