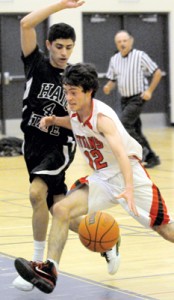 Titans guard Alan Russel punctuated the point that York Mills was not to go gently into the night on Nov. 23 with a buzzer-beating half-court swish.

Down 29-25 at the half, a late 13-2 run in the second quarter led to a March Madness-style frenzy between the Titans and Haig State.

It was just what the team needed, forward Tre Eli said, as the Titans were down 13 points at one point.

“We weren’t out of the game anyways, we were only down by seven but it was a big momentum builder,” he said. “If you see we came out in the second half and as soon as we got going we took a big lead after that.”

Erupt they did as both Russel and Eli continued their scoring.

Eli had 20 points, 18 of which came from treys, and he added seven boards. Russel tallied 11 and pick-pocketed Haig cagers for five steals.

Titans coach Denny Lee was beaming after Eli banished Haig State with a game-ending three-pointer. The result: a 50-49 win.

“The two seniors on the team, Tre Eli and Alan Russel led by example,” Lee said. “They hustled all the way through the entire quarter.

“Earl Haig was a solid team but I guess it was just a one-possession game and we were on the positive end.”

The secret to York Mills’ success?

“At the end of each practice we always shoot half-court shots for juice,” Lee said. “So when Alan comes off the court he goes, ‘Mr. Lee do I get 10 juices now for getting that shot in the game?’”

However, coach Eric James was disappointed his charges could not win their first game at home.

“The rest of our kids today, we lacked a little bit of intensity,” he said. “We’re going to have to pick it up a little bit in practice and have a better sustained effort in terms of intensity for the game.”

He did not credit the 13-2 run by York Mills or Russel’s half-court as the catalyst in their unraveling.

“It happens, what’re you going to do?” he said. “Fact was we were still leading at halftime — we were leading for a lot of the game.

Back to the Titans, Eli believes the tight game against Haig is a harbinger of things to come.

“It means a lot because last year we were 1-8 and this is a big win,” he said. “We got a hold of the new juniors, so we’re playing with them and this win gives us momentum.”