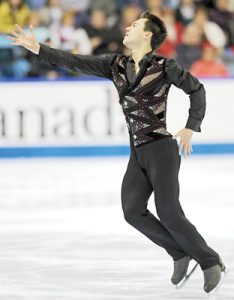 For Vancouver-bound figure skater Patrick Chan, the support of his teachers at École Secondaire Étienne-Brûlé helped him train for the big show.

“They had experience with Olympic athletes already so they really helped me when I was travelling,” he said during a conference call from Colorado Springs, Colorado. “They gave me extra time for certain projects and certain tests.”

One of Canada’s hopefuls to medal after picking up gold for three consecutive years at the Canadian Championships, North Yorker Chan is happy to be competing in the Great White North.

“Having the Olympics in the home country, it really provides me with a lot of energy and motivation, and I think that will only help me,” he said. “You have to learn to really focus and I think when it comes down to the day I compete, I will have to focus on what I have to do.”

Chan said he’ll have to remain disciplined in all the excitement, even if his country is hosting the Olympics.

“It’ll be great hype, but you also have to learn how to manage it, because I think Canada has never been so excited about a home game,” he said.

But that doesn’t mean there aren’t any fellow athletes he’d like to meet while carving up the Pacific Coliseum.

Hockey player Sidney Crosby is on the list of Canadians Chan wants to meet. But before he can relax and schmooze with fellow Canuck competitors, he’ll have to get into the competitive mindset.

“I put a lot of importance in my mental preparation because I still believe strongly that most of it comes down to mental when it gets to competition,” he said. “We practice everyday and that’s part of the physical, so physically you’re more prepared than ever.

“When I get there I will be so overwhelmed and I will have to think about something, one single thing to keep me grounded and I think that’s just trust my training.”

He wants to hear his own anthem played first when he stands tall on the podium.

“Athletes like us, we all strive on moments like this and this is where amazing moments come true and happen,” he said of the excitement of medaling. “I hope to deliver on that.”

As for any secret weapons Chan has against his top competitors Evgeny Plushenko of Russia and Americans Jeremy Abbott and Evan Lysacek, he said it’s not homecooked meals.

“My mom’s an awful cook,” he said, with a laugh. “We mostly go out to a restaurant to eat. That’s probably her secret recipe: to bring me out and have dinner.”