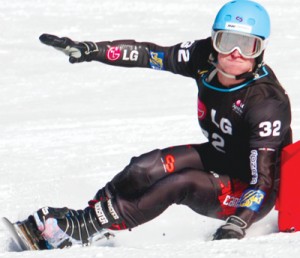 The thrill of racing in his home country was evident in his voice in a phone call from Stoneham, Quebec where he was competing in the LG Snowboard FIS World Cup in late January.

“We’ve all been working for this and there were definitely a lot of times last year when I didn’t think it would happen,” he said. “After all of the results I’ve had this year, I’m really excited about it.”

It will be the fourth time snowboarding will be contested at the Olympics after it was introduced at Nagano, Japan in 1998.

Originally just halfpipe and giant slalom, the slalom was changed to parallel GS during Salt Lake City (2002) and snowboard cross was added at Turin (2006).

Lambert has noticed an avalanche of attention since the competitions began.

“I heard that snowboarding is going to be the second most viewed sport next to figure skating at the Olympics,” he said. “I think this has been amazing for (the sport) and also just having it in Canada.

“The level of exposure we’re getting has been great.”

Lambert has appeared on MTV’s Over the Bolts, a show highlighting the lifestyle on the slopes.

“People are excited and they want to hear about what the athletes are doing,” Lambert said.

It’s been non-stop since October for the Toronto native, as the 2010 World Cup season is gliding through the winter.

Even though he attended Royal St. George’s College in the Annex, his love of sailing and snowboarding often had him removed from the local sports scene.

“There just wasn’t the level of competition I was looking for. It just didn’t exist in high school,” he said.

He joined the Caledon Ski Club where he carved up the Caledon Hills in Peel Region. And he dispels any myths regarding the lack of altitude in Ontario.

“We’ve got steep hills, icy hills and that’s great for training,” he said. “I don’t think it really matters where you come from to be honest.”

Now, he’s tearing up the slopes in the parallel giant slalom with fellow Olympians Jasey-Jay Anderson, who was ranked fourth in the World Cup standings, and Matthew Morison, 41st at the end of January.

Vancouver for the eight-ranked Lambert is all about competition.

“I’m pretty stoked about going into the event being ranked really well,” he said, adding he’s not too fixated on the opening ceremonies.

“I don’t like standing around for long periods of time, so I hope I don’t get too anxious about that,” he said. “It’s important to remember there’s a lot of bells and whistles and at the end of the day it’s just another race. It’s going to be great to be a part of the excitement.”