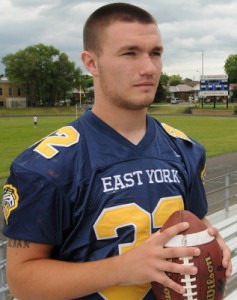 It was evident to his Goliaths football coach, Glenn Edwards, when the starting slotback surprised him with an age-defining revelation.

“The one thing I could hold against Jordan is he came into practice one day and said, ‘Coach, you played with my grandfather,’” he said. “I said, ‘Hold on, what do you mean I played with your grandfather?’

“I contacted his grandfather and last year he was our trainer and line coach.”

It’s the sort of kinship typical of East Yorkers, Edwards said, and it’s what keeps Ball focused on university, especially in the wake of a family tragedy.

Older brother Adrian died at the age of 22. It was the loss of one of Jordan’s biggest fans but one that he used as a motivator.

“I kind of put it in my mind that he, my brother, would always want me to do this,” he said. “He loved watching me play, he’d want me to play. He always loved it when I did good and he was always proud of me.”

Edwards observed how the loss matured his star receiver.

“I think it affected his perspective on what to do in a positive standpoint,” he said. “His care and love for his brother meant that he had to up his activities.

“From a sports standpoint, he wanted to give a message to his brother that he wasn’t going to be forgotten and on top that (Jordan) was going to work his darnedest to make his brother proud of him.”

His determination led him to be named MVP of the football and hockey teams at East York as well as a recipient of the Colin Hood OFSAA award.

He’s since been accepted to McMaster University in Hamilton, Ont. where he plans to tackle social sciences in the hopes of helping children.

“I want to work with kids,” he said. “I want to be a social worker, along those lines.”

While he’s there he’ll also test his mettle on the gridiron for the Marauders.

But not until after he flies out to Austria to participate in the under-20 world ball hockey tournament where he’ll help Canada defend their gold medal.

“It’s going to be an amazing experience,” he said.

His busy sports schedule aside, he’s comfortable with his future not being entirely dependent on a Friday Night Lights dream.

“Whoever takes me, takes me,” he said. “I’m not going to say I want to play in the CFL, but if it takes me there … if it doesn’t work I always have school and that’s the main thing.”

No matter what happens next, his sister and parents will be right there with him. His brother most definitely would be proud.