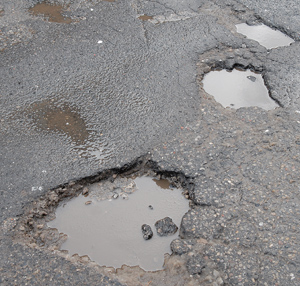 Potholes are back for another winter

It’s shaping up to be a bumpy ride for drivers this winter, all because of a sharp increase in potholes.

Transportation Services has already repaired 8,000 of the asphalt divots in the last two months of 2008 compared to approximately 3,000 the previous year, said director Myles Currie.

“It’s really not our pothole season, just yet,” he said, adding most repairs are done mid-February to April.

But there is hope.

Currie said the city has increased the number of staff repairing potholes from about 50 to 100.

“Potholes are labour intensive, they cost a lot of money and they don’t do a good job,” he said. “They’re not even a Band-Aid solution because they won’t stand up in the inclement weather.”

And Walker has had many a run-in with potholes on Mt. Pleasant Rd., where several have surfaced just north of St. Clair Ave. East.

A typical pothole is caused by water working its way into cracks in the road, freezing underneath and then lifting the pavement when it thaws.

How the water permeates the asphalt depends on how well-maintained and repaired a municipality’s roads are, said Rob Bradford, executive director for the Ontario Road Builders’ Association.

What can the city’s transportation services do?

“They can make darn sure they keep on top of their basic maintenance,” Bradford said. “When they go out in wintertime on an emergency repair, typically they take out some cold mix and just pack it in (a pothole) and that’s a temporary Band-Aid.

“But all too often municipalities don’t come back in the summer and put a real repair in there,” he added. “They just let that cold mix sit and come next winter that’s trouble waiting to happen.”

“Look at some of the roads, they’re just a mass of patches,” Walker said. “I drive along Gerrard, it’s a terrible street right where the university is.

“It’s been patched and ripped up so often it should be rebuilt.”

The Ward 22 councillor admitted the potholes are a reflection of Toronto’s weather, but added it’s just another example of the city’s infrastructure woes.

“Patches only tide you over for a week, but then they grow into bigger holes and bigger patches, and then patches on patches,” Walker said. “All you could expect is they hold up for that short period of time in bad weather.”

One of the solutions out there is new asphalt mix technology that will stand up to freeze-thaw cycles.

“We’re constantly looking at new products and testing them,” Currie said. “The biggest challenge is our Canadian climate where we can go from minus 20 to plus 10 in a day or two.”