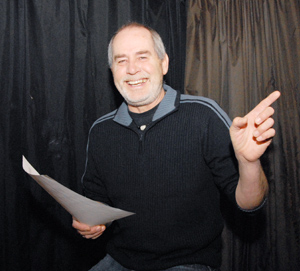 James Dewar has had his fair share of saucy customers at his poetry show Hot Sauced Words held monthly at the Black Swan Tavern.

“I’ve had a couple over the years that were there just to piss people off.”

But the characters who pull those stunts never get a second chance, Dewar says, adding he’s grown accustomed to the city’s poetry scene over his seven years of experience.

After 23 years of banking, he decided to pursue his muse at various poetry shows across the city, including at the Renaissance Café and Art Bar. However, the lack of interaction between poets led Dewar to create his own onstage show.

“(Poetry) should be a symbiosis between the reader and audience, because what usually happens is people sit in the audience, they applaud at the end and whether the poet’s really good or not — it’s all very polite.

“There were lots of times when I thought, I’m not having any fun at all,” he says. “And if the audience does say a poem really moves them I don’t have any way to communicate that back with the poet.”

All it took was a little feedback, not from the mic, but from fellow poets. After a poem was presented, Dewar got the audience’s paeans for the writer by shouting out lines or words that moved them.

Now calling the Danforth Ave. pub home, Hot Sauced Words originally started a couple of years ago at It’s Not A Deli, an art gallery in the Ossington and Queen area.

But back then the show was sandwiched in anonymity.

“We didn’t have a name when we started,” he says, “(It’s Not A Deli) specialized in their hot sauce on their sandwiches, and I just came up with Hot Sauced Words.

The name also appeals to his carnal side.

His yens aside, Dewar sates the piquant needs of poetry lovers with featured poets, audience challenges and an open mic for four minutes to any brave soul who dares venture from the pub’s shadows.

And with his involvement he’s learned of the schism amongst some of the city’s poetry cliques.

“There’s rifts everywhere in the city right now,” he says, with a hint of exasperation. “The spoken word poets are being attacked by a certain group of established poets saying it’s not poetry.

“There’s been some bitter blog battles over it,” he adds. “I don’t care about that, and quite frankly 80 percent of the poetry community could care less about it anyway.”

Regardless of the politics, Dewar welcomes scribes from all styles to his shows because poetry should be more about community, he says, and with Hot Sauced Words, he wanted to change all that.

And his primary method is with humour, something he says melts away tension and makes the audience more receptive.

“When you’re at a comedy club, for instance, and you’re listening to the comedian, you’re really listening for the punch line,” he says. “With comedy you make people laugh, they’re more receptive and they listen harder.

“In that case people who laugh together tend to like each other too.”

And the show emits that positive vibe, Dewar adds.

“To me the most important thing is to create a form of entertainment for the evening that centres around poetry,” he says. “So the comedy, the being sexy, the audience giving feedback after every poet … the open mic, and then two really good features who are the anchors of the show — it has a natural flow to it.”