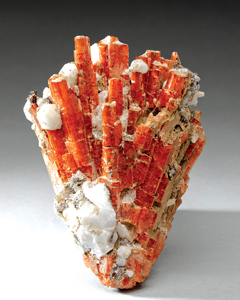 You could say the Royal Ontario Museum has an apatite for rocks and minerals.

Which is why the ROM launched its new galleries — over 641 square metres worth — to house its favourite rock, mineral and meteorite samples.

Opened Dec. 20, the Teck Suite of Galleries has space for 2,300 specimens and includes the Vale Inco Ltd. Gallery of Minerals, the Gallery of Gems and Gold, and the Canadian Mining Hall of Fame.

“It was well worth the wait,” she said. “It’s quite a process. Honestly I had no idea it was that much work to put a gallery together.

“I’ve been here since April 2007 and every day I’ve been working in one way or another.”

Some of the golden elements in the mineral gallery are the new e-labels that allow museum patrons to access information on specimens at the touch of a screen.

“We’re able to expand and add more information to the wall,” Tait said. “So if we want to have some more stories about a specific mineral or this sample here, we’re able to do that, unlike a standard case.”

It’s just one of the evolving sections of the exhibition, she said, which will also have a temporary case for current events, including images from NASA’s Dawn probe that will navigate dwarf planet Ceres and asteroid 4 Vesta.

“When we get a little closer, get better images, we can put them out on display and educate people on current events, which is nice,” Tait said.

Content is not the only nugget being updated on a regular basis in the gallery, as some of the minerals need constant air conditioning, especially the meteorites and pallasites, to preserve their integrity.

Most specimens are pretty stable, Assistant Curator Vincent Vertolli said, but there are a few high-maintenance minerals.

“We have what are referred to as sulfide-bearing minerals, and most of them are safely combined with iron or magnesium,” he said. “A typical example would be pyrite, otherwise known as fool’s gold.

“Iron really loves oxygen and we can see that with our cars in the winter: after a salty winter they start to rust.”

In order to keep the fool’s gold from oxidizing, its case is kept cool and dry. And along with the infamous iron pyrite, the peanut brittle-like wulfenite and rosebud-shaped barite, the Teck Suite features exhibits clarifying such mineralogical terms as luster, cleavage and the Mohs scale of mineral hardness.

And since the exhibit is set in stone, visitors won’t have to worry about it rolling away. However, two current displays in the gallery will come to an end later this year.

The Nature of Diamonds shines until March 22 in the Garfield Weston Exhibition Hall. The private gem collection of Apple Inc.’s first president Michael Scott, Light and Stone, is available up to Nov. 15.