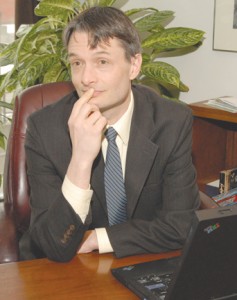 Believe it or not, there is an engineering problem with how Toronto deals with its doggy deposits in park garbage bins, says Parkdale-High Park councillor Gord Perks.

About 5,100 tonnes of litter from parks is collected each year, and about 25 percent of it is estimated to be pet waste.

The problem lies not with the poop itself but with the plastic bags dog owners use as part of the disposal.

“What happens is folks stoop and scoop, tie the stuff up in plastic bags, put a big, fat knot at the end and throw it in the bin,” Perks said. “Then we wind up with a whole lot of bags that our mechanical processors can’t burst open to get the organic material to compost.”

Solid Waste Management officials have allowed for the use of plastic bags to store organic waste in green bins, as mechanical processors have no difficulty removing their weight due to high organic to plastic ratios.

But with feces, the ratio is the reverse.

“When we’re dealing with the dog waste in particular, you then have a situation where a bag is being used each time a single piece is being picked up,” says solid waste director Geoff Rathbone. “And you end up with a very high ratio of bags to organic material.”

However, it’s the sheer volume of excrement combined with the plastic bags that are bunging up the solid waste department. Rathbone said he is optimistic that the city’s organic waste disposal problems will be solved soon.

“The future looks good for green bin processing, it’s just right now we’re in a situation where we have such a strong response,” he said.

“We are completely out of new capacity.”

The capacity problem will be solved once additional processing plants are constructed. after that, Solid Waste will begin to bring the green bin program to public spaces like arenas, city hall and parks, Rathbone said.

Meanwhile, the Parks and Environment Committee, of which Perks is a member, has asked staff to go back and take a look at best practices in other urban centres to come up with a solution to the doggy dilemma.

“We want to see if any really sharp spark out there in the world has figured out a way around this problem,” Perks said.

“What you learn when trying to solve solid waste problems is there is no big answer, there’s just thousands of little answers.”

Even so, the whole dung thing amazes a flushed Perks.

“It’s just amazing the little details in urban living that blindside you when you try and do the right thing,” he said.