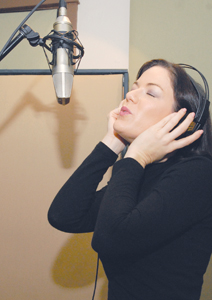 Emilie-Claire Barlow develops a ‘oneness’ with her songs

The 32-year-old York Mills vocalist has studied the languages of Portuguese and French, sang to Japanese audiences at the Ginza International Jazz Festival in Tokyo, but it’s the universal language of music that she’s been smitten with since she was a kid.

“My mom says I was singing around the house when I was very small,” Barlow says, with a laugh.

Music has always been a part of her life, growing up with a singer-songwriter mother, but it wasn’t until she was eight that Barlow began to pursue a professional singing career.

And while studying music theatre at the Etobicoke School of the Arts she discovered the jazz legends of the ’30s and ’40s.

“I really love singers that exude joy when they are singing, because that’s the way I feel when I’m singing,” she says. “So singers like Tony Bennett and Mel Tormé I really admire.”

An even bigger idol is Ella Fitzgerald.

“There’s just something so special about her, and I was lucky enough to see her when I was around 10-years-old,” Barlow says. “I saw her live, my mother took me and that was a pretty special experience.”

Using Fitzgerald and contemporaries as her inspirations, she set out on her own career, with a debut album in 1998 called Sings.

A decade later, with six albums, two Juno nominations, a Gemini nod for best performance in a variety program, and female vocalist of the year honours from the 2008 National Jazz Awards, Barlow is wrapping up the production on her seventh album, Haven’t We Met?

With all her hard work paying off, she hasn’t forgotten what she has learned about the industry.

“For me to look back on all six records and see the progression of myself as an artist, it’s very fascinating to me,” she says. “Every artist has influences and they try to emulate artists that they admire.

“That’s how you learn how to become a better vocalist or a better instrumentalist. You copy until you start to develop your own style.”

One major difference Barlow has noticed from her first album is her “oneness” with the songs she chooses.

“I think when I listen to my first album and when I remember the process of making it, I was always concerned about hitting the right notes, showing people what I could do vocally, and I wasn’t really making an emotional connection to the song,” she says.

Another discovery for Barlow is the change in the jazz scene itself, with younger audiences coming to shows, as well as the vibrancy in its players.

“There are so many amazing instrumentalists and vocalists coming out of our schools: Humber, York, U of T,” she says. “It’s encouraging to me that there’s this level of musicianship and it’s also encouraging to me that people continue to pursue music despite the fact that it’s becoming an increasingly difficult market.”

And she’s excited about her newfound audiences’ courage to explore new genres.

“I think that sometimes people can be intimidated by the word jazz, thinking that it’s just cerebral, eight-minute long solos, but it really covers such a broad spectrum,” she says.

“The genre is so huge from vocal jazz to bebop to blues. I think there’s something for everyone.”