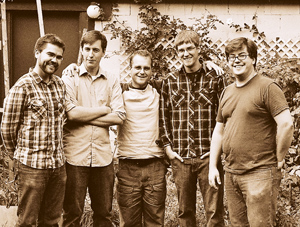 For midtown-based Americana band Muskox, they cover as much ground musically as their shaggy namesakes do geographically.

From jazz to folk to indie rock, the five-man acoustic band is an eclectic mix, and banjo-playing frontman Mike Smith is no exception to the rule.

The Northern Secondary School alumnus says his instrument is the thread that sews the band together.

“While (the banjo) is a presence in some jazz, it’s not exactly the first thing you think of,” he says with a grin.

But when asked how to classify the band’s rhythms, he pauses in search of an answer.

“We’ll get off easy, in terms of being asked what genre, and we’ll say oh yeah, we’re instrumental, but that’s not descriptive at all,” he says. “While there are huge jazz elements in the music, I would feel really out of place playing at the Rex or something like that because the music (there) is more composed than improvised.”

Formed in the vast landscape of U of T’s Faculty of Music, Smith pulled together former classmates Matthew Dunn on guitars, Mark Laver on alto sax, Ali Berkok on electric piano and Jamie Drake on vibraphone for an impromptu show at Tranzac’s 2006 Bummer in the Summer Festival. Double bassist Pete Johnston later replaced a departing Dunn.

“Initially I was just invited to fill up a set for (Bummer in the Summer) — that’s how the band started,” Smith says. “The response was good, and everyone was enthusiastic about continuing to play, so from then on, I wrote some more music.”

As for the band’s name, rest assured it’s not because they have a pungent aroma about them.

“It’s partially arbitrary, but also it has to do with the aesthetic of our music. It’s ambient, it’s quiet, there tends to be a lot going on, but the idea is to have a space, and have a fairly peaceful sound,” Smith says. “Overall, the image of an animal on the tundra, kind of leads to that. For me it’s this image of being a little bit mysterious.”

Smith had the name in mind while at university, and “eventually it became an actual thing.”

And that varsity dream has garnered some notice from media outlets like CBC who taped the quintet’s show at the London Ontario Live Arts Festival.

“It’s really exciting to have people hear the music and be interested in it — it’s sort of gone past the point of friends coming to my show,” Smith says, with a laugh. “It’s a big personal validation to write something that I guess is good.

“Also, I’m really excited that there are folks out there interested in hearing different music, and are open to new ideas.”

And with Muskox’s latest EP release Gallantries — in a three-inch format and handmade packaging — Smith has taken his band’s eclectic style and combined it with more structure, as opposed to their first two releases, Caveman Caveman Crystal Skulls and Fever Dream.

“There were a lot more written sections than before,” Smith says. “In the first two (albums) there are big stretches of basically jazz improv — there’s a saxophone solo, bass solo. With Gallantries, it’s pretty much 20 minutes of solid, written music that was a little bit improv, but it’s not really (revolving) around a featured instrument.”

Though Smith will be touring the northeastern U.S. with band MV and EE, he will return to his fellow ungulates for a Nov. 23 show at the Tranzac.

And after that — when the permafrost thaws — it’s back in the studio.

“The next plan is to do a full length CD,” he says. “Hopefully we’ll be recording in the spring, it’s just contingent on getting new material ready.”