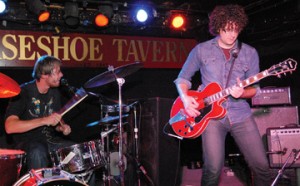 In the dark confines of the Silver Dollar Room, shadowy figures tune their guitars, rap on the snare drum and do mic checks with the painted murals of various blues legends as their audience.

Light faintly filters in from an adjoining room. In the canary hue, a man clad in an embroidered cowboy shirt and another in denim enjoy a moment of repose before stepping into the spotlight for their blues-infused rock show.

Drummer Pete Ross leans forward in his wooden chair and asks if the noise is too much for the interview. His guitarist bandmate Aaron Doyle echoes the question.

The two are the Speaking Tongues, residents of the Christie and Bloor area, but both from outside the city — Goderich for Ross and Sarnia for Doyle.

They met almost three years ago and have bonded in a way that would make lifelong school chums jealous.

And it was all over music.

The two worked in an open office environment, so hearing coworkers’ music was common, but something about Doyle’s music interested Ross, and vice versa.

“We started trading music, and then we would bring our instruments and stuff into the office on the weekend and play,” Doyle says.

“It got us into a lot of trouble,” Ross adds with a smirk.

Little did the two know, a member of the Toronto Maple Leafs lived above their Spadina and College office and was offended by the duo’s impromptu jam sessions.

“He freaked out,” Doyle recalls. “The next Monday morning there were notes in the elevator and the lobby.”

“No rock and roll allowed,” Ross adds. “We had no idea — it was an office building.”

“Some professional athlete” shut the duo down, but their tenacity and common interest in music pushed them into forming the Speaking Tongues a year after their first meeting.

And their biggest influence: blues. Not just the slim pickings found in the contemporary electronic influenced genre, but rather the turn-of-the-20th-century stuff.

The two bandy about names like Sonny Boy Williamson, Howlin’ Wolf, Mississippi Fred McDowell, but then change chords crediting Led Zeppelin, the Soledad Brothers and the White Stripes as the ones who progressed blues further.

Anybody who subscribes to that stripped down blues-rock is golden, according to the Tongues.

“Those are the two things that have a lot of emotion in them,” Ross says. “Nothing too out-there or crazy, just something that hits home and you can relate to.”

“People that get it, get it,” Doyle adds. “People know all those bands (Led Zeppelin, the White Stripes), but when you connect stuff from the ’30s to psychedelic rock in the ’70s and stuff, they don’t see the connection.”

With a strong bond in blues ideology, the band’s next step was to get a gig — at the Boat in Kensington Market, with many thanks to the venue’s booker Keith Hamilton.

And the Tongues credit Hamilton as the catalyst for their success.

“He’s like our band’s godfather,” Ross says. “He’s a great guy who books bands — he let’s people try out at shows, which is awesome.”

Since a chance encounter between Ross and Hamilton at, of all places, a bicycle show, the Speaking Tongues haven’t had to work hard to get gigs.

“After our first show, Keith started booking us randomly,” Ross says, with a hint of surprise. “For the first year of our band we didn’t call for a show. Keith would book us, our friends would book us, people would find out.”

Through all the outside assistance, it helped the band focus their energy into songwriting, and the result was a debut album called, Wild Sound.

Doyle’s gutsy, heavy guitar riffs combined with Ross’s bludgeoning-to-near-death of the drums strike at the heart of raw blues.

And the rugged vocals don’t hurt either.

With the aggressive, interpretive approach to Howlin’ Wolf’s breed of music, the Tongues are both optimistic and modest about their future.

“Even if there is no real agenda, we’ll always keep spreading ourselves just because we’re pushed by our desire to play music,” Doyle says. “So eventually we’ll keep taking it further and further.”