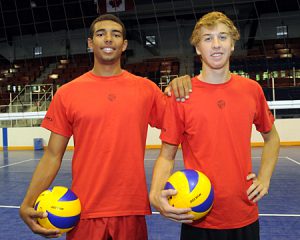 The lake waving to you from your south side, the fine granules of Ashbridges sand squeezing through your toes and, before you for one brief moment, a Wilson ready to be overkilled into your opponent’s territory.

For the past year, the Ontario Volleyball Association has basked in the free access to one of Canada’s finest beaches for its sport.

And it’s the nation’s net gain, says OVA technical director Jason Trepanier, as he thinks about what uninterrupted access to the Beach means to Canada’s chances of medaling at the London Olympics in 2012.

The OVA has partnered with Volleyball Canada and Canadian Sports Centre Ontario to create a world-class training program for beach volleyball.

During the last games in Beijing, Canada’s beach volleyball did not have a structured program in place.

“All the Beach teams were their own islands,” he says. “They were all separate, with their own coaches, and trained in their own cities.”

Now, Toronto has become the epicentre of volleyball activity.

“I think we’ve done a better job of bringing in all of the top athletes,” Trepanier says. “Having them compete and work with each other has benefited all of them.”

Some of those who have reaped the rewards for the first time in Canadian history are under-19 World Championship bronze medalists Aaron Nusbaum and Grant O’Gorman.

With them in Umag, Croatia were the then-16-year-old tandem of Andrew Kocur and Danny Demyanenko. The two finished fifth, a great result considering they were a year younger than their opponents.

Already hard at training, the two, officially turned 17 in July, took time out at a busy schedule at the University of Toronto.

“We have access to such an amazing beach and an amazing venue to practise in on a regular basis, whereas other provinces will maybe not have this privilege,” Demyanenko says. “It gives us that advantage over some countries and other provinces.”

The two St. Michael’s College School students joined forces in grade 7 and haven’t looked back since. With the national team now training in their backyards the excitement is volleying higher.

“There are a lot more programs that are developing for younger athletes,” Kocur says, adding Team Ontario introduced new age groups in under-16, 17 and 18.

Team Canada has also expanded their age limitations, allowing players even of Demyanenko’s and Kocur’s ages to join.

“It’s helping us develop not only for the Worlds but for the Olympics as well,” he says.

Their first Worlds appearance, the fifth place finish, provides added confidence considering the depth of competition at that level.

“It was obviously very hard because every team was just as good as us,” he said. “On any given day, any team could have beaten any team.”

“We’re definitely going to go back hungry for next year because that was one of our first international experiences,” Demyanenko says. “We know what we should expect, and we’re going to be training our butts off to be in contention for that gold next year.”

Not bad for a former swimmer (Demyanenko), and hockey player (Kocur).

It’s also a testament to how fast the sport is evolving in Hogtown.

Trepanier is ecstatic, and optimistic about bringing home gold at both London and Rio in 2016.

“I think if we are going to get a medalist, the probability that they are from Toronto, and train at Ashbridge’s Bay is pretty high,” he says. “In the last 20 years we have become a lot more systematic — professional — in the services we’ve been able to provide.

“It’s very typical for the top B.C. volleyball players to come here now just because it’s difficult for them to get the service anywhere else.”

For Kocur, it’s the start of a young Canadian program starting to hold its own in the world.

“Volleyball, I think, is the second largest sport in the world, but Canada, I wouldn’t consider it to be there yet,” he says. “With the OVA promoting it a lot and opening it up with all these new venues and opportunities for kids, it’ll be there.”