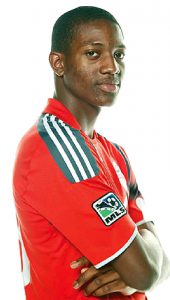 Doneil Henry has set the standard for what Toronto FC Academy prospects are expected to achieve.

Developed through the Reds system, Henry is the first success story out of a program kicked off in 2008.

“The academy boys and coaches definitely made a big impact on my growth and the day-to-day training and constant pushing of the coaches, along with my parents who were the encouraging me to do what I love,” Henry said.

The 17-year-old has worked hard both on and off the soccer field as he has been enrolled in Vaughan Road Academy’s Interact program that helps students involved in the arts and athletics obtain their degrees without affecting their vocational pursuits.

“The Interact program definitely helps with outside commitments and they are very understanding,” he said. “As long as you communicate well, you put yourself in a good position to succeed.”

It’s been an educational two years since joining the junior academy, after youth stints with Brampton Bullets and North Mississauga Panthers. Henry, originally from Brampton, has benefited, making the jump from Toronto FC Academy to the professional team.

“You had to do extra stuff to make sure you were fit because when everyone else is fatigued and you have that extra push, it definitely helps out,” he said.

Henry has suited up four times for the Reds against Vancouver Whitecaps, C.D. Motagua, Bolton Wanderers and DC United.

“Since I got a taste of this season’s action … I just want to get on the field more often,” Henry said. “I’m just going to work hard more often and just work hard during the off-season.”

It’s a relationship that has turned into admiration as Henry admitted he looks up to Attakora, as well as Real Madrid star Sergio Ramos.

Next on the agenda is a chance to play against New York Red Bulls Thierry Henry.

But for now, it’s focusing on getting his high school diploma and making Toronto FC full-time. He hopes the Reds share his goal and sign him.

“If that’s what they have in mind,” he said. “Right now my focus: I just want to finish high school and get that out of the way.

“If I need to go to university or college and play soccer, that’s what I’m going to do.”