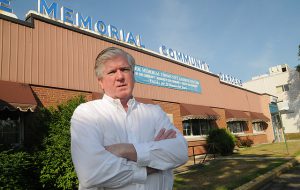 The dim glow of magnesium adds a blue hue to an iceless hockey pad at Leaside Gardens Arena.

Fitting for a late morning visit from Leafs Nation royalty.

At work since 5:30 a.m., Toronto Maple Leafs GM Brian Burke looks out onto a surface he’s familiar with. NHL jerseys hang from the rafters honouring those who grew up in the midtown community.

It’s one that Burke has made his home since 2008. Not Leaside proper, but just a kilometre south of the hockey rink in Bennington Heights is where he and journalist wife Jennifer Mather Burke have settled.

He’s candid about moving from a more anonymous lifestyle out in Anaheim to a hockey-centric burg.

“I’ve always liked Toronto before I lived here,” he says. “I used to love coming here with my teams. I thought it was a great hockey town: safe, clean city; nice people.”

The lack of privacy can be inconvenient at times, he acknowledges, but he understands that “it’s because people love hockey.”

“I’d much rather work in a market where people love hockey.”

The phones are silent right now as the GM notes fellow NHL managers are dealing with salary arbitration. Burke is as free as sunlight to a maple tree from restricted free agency.

His mind at the moment is focused on supporting amateur sports — in particular, aiding in the expansion of Leaside Gardens.

Daughter Marin, now 7, learned to skate on the very surface he looks over. Later, over a coffee in a large meeting area hidden away from the rink, he explains why amateur hockey needs support not just from the community but from all levels of government.

“In my opinion there’s something wrong with where we’re spending our tax dollars if to raise money for municipal rinks individual donors have to do it,” he says. “I think we’ve got to look at how much money we spend on building arenas and refurbishing arenas … in Canada.”

During his time in both Hartford and Anaheim, he noted the amount of government funding to private donations was 50-50. In Canada, Burke has observed, it’s 80 percent municipal/community to 20 percent private.

“I think the average person in Canada assumes that the government’s going to build arenas and that there’s no reason to write cheques for that because it’s part of their tax dollars,” he says.

Before the replacement of the old Lakeshore Lions Arena with the MasterCard Centre in 2009 — the Maple Leafs’ and Marlies’ practice facility — the last arena constructed was Scarborough’s Malvern Arena completed in 1981.

“We need to devote some money to the infrastructure of this game or it’s going to be in trouble,” he said, admitting later it is hard to justify, given the current economic climate.

But he avers if the country wants to continue its sporting tradition it needs to work hard at maintaining the sport’s legacy.

“The birthright of Canadian kids is the right to play hockey, and it’s not always attainable right now,” he says.

Burke admits he’s played only a small role in the arena.

Former Leafs Nick Kypreos and Doug Gilmour have been there since the opening faceoff.

“I think a big part of being a general manager is giving back, but my role here has been very small,” Burke says. “I don’t want to overstate it.

“You talk about guys (Kypreos and Gilmour) who are putting weeks and months and years into this. What these guys are doing is magical.”