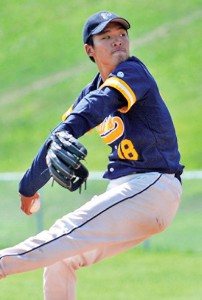 Hurling the old fastball helped Daisuke Suzuki bridge an ocean when he moved to Toronto from his hometown of Tokyo, Japan in 2007.

Suzuki started playing ball in his home country in grade 2, so when it came to fit in with new peers at Forest Hill, there were no missed signals.

“Sports are a very important way for me to communicate with other students because the first time I came here three years ago, I couldn’t speak any English,” he said, taking a break from a schedule that’s soon to include more glove action. “Through the sports teams, I made a lot of friends, so I kept playing and playing.”

This year, the breaking down of language barriers led the Forest Hill Falcons to court the city championships against Richview Saints.

Though the team came up short, losing 2-1, Suzuki said it was a very memorable run for him and his teammates.

“Obviously with us grade 12s there was a hunger, so we really wanted to win,” he said. “Everyone on the team hit the ball, so maybe that’s the reason why we made it to the citys.”

When Suzuki was not splintering bats on the ball diamond, he was throwing tunes from the clarinet in the school band and was an active member of the athletic council.

“It was my last year at Forest Hill,” he said. “I thought I should start getting more involved in the school and show my leadership.”

Suzuki is heading to University of Western Ontario where he’ll study kinesiology in the fall. He’s not sure what’s in the cards after that, but says he’s exploring the possibility of being a trainer or physiotherapist. He also wants to learn more about acupuncture.

Suzuki does know he’ll give the Mustangs baseball team a go, even if he’s modest about keeping the bats silent of three strong Toronto teams: Northern, Humberside and Richview. Not to forgot a 12-strikeout game against Danforth Red Hawks.

But before he makes his way to Western, he’ll have his sights set on a possible Ontario Baseball Association title with his rep baseball team.

The AAA Etobicoke Rangers midget will try to qualify for the nationals in Sarnia July 31 to Aug. 2.

He’ll see some stiff competition from nine other associations, including some familiar faces from East York.

All will be vying for a chance to represent the province at Baseball Canada’s 2010 Midget Championships in London, Ont.