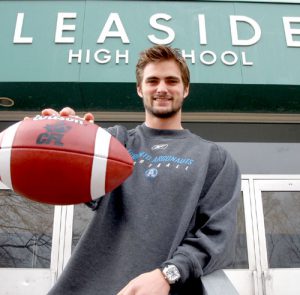 Leasider Mike Bradwell couldn’t ask for anything better than to return his hometown as a Toronto Argonaut.

The rookie slotback finished his season with 350 yards receiving on 25 catches, and added a touchdown against the Saskatchewan Roughriders to his totals.

He’s reserved on his tallies, as a battle weary Argos squad led to him running more routes.

“We had a bunch of injuries at receiver so I was able to get quite a bit of playing time, which is not that common for a first year Canadian,” he says. “I’m happy with my performance. I think I stepped up and did an okay job.”

It wasn’t always about the pigskin for Bradwell, though. His milieu before the gridiron was the ice.

“I played hockey my whole life,” he says, adding his mid-teens was where he discovered football was more his speed.

“When you get to around 15 or 16 that’s when you kind of know in hockey if you’re going to be able to become professional or not,” he says. “When I got into grade 12 I started playing football. It kind of suited my strengths: I was tall, fast and could catch.”

Suiting up for Leaside Lancers on special teams, he had a great experience as the school made a run for the playoffs. It was that and being able to hang with his classmates after school that he remembers the most.

“We thought it would be a fun thing to do to play on the team,” he recalls. “To be a part of the team with a close group of friends was something that I thought was pretty memorable.”

After winning a Tier 1 playoff match with the Lancers — the first time for Leaside, Bradwell says — he graduated and joined the McMaster Marauders while taking engineering at the Hamilton area university.

And it was while battling the rest of the Ontario University Athletics teams for the Yates Cup that Bradwell had an epiphany.

“There were a bunch of guys on that team that went to the CFL and seeing what their level of skill was like, I was thinking, ‘Okay, I can actually get to that level in four years’,” he says. “That’s kind when I began to realize that I might have a chance of doing that.”

Now donning the Double Blue, Bradwell notices the differences between Canadian Interuniversity Sports and the CFL.

“Obviously people are bigger, stronger and faster. Mentally, things happen much quicker,” he says. “When you’re running routes versus a zone, all the holes close quicker and the ball gets there quicker.”

But McMaster helped him to acclimatize to the big leagues.

“We had a great coaching staff at Mac and I had a great quarterback in Adam Archibald, who probably has a professional strength arm,” he says. “It wasn’t too shocking to have the ball coming in as hard as it did.”

Though there was no welcome wagon when he played his first game in Hamilton against the Ti-Cats, and likewise in his debut at the Rogers Centre, he’s still thankful for the chance to play in his hometown.

“I love being here,” he says. “All of my family and friends are close and to play football, it’s a dream come true.