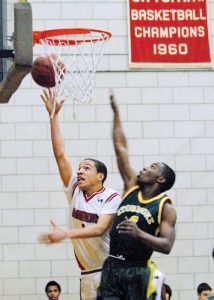 It was a case of follow the bouncing ball when the Etobicoke Rams visited Runnymede Ravens on Dec. 16.

The West Region senior boys basketball match was rife with board crashing due to an unforgiving net.

However, Runnymede managed to fly away victorious, 45-40, with only five players total.

Ravens head coach John Kalanztzalos said a lack of bench and a gassed flock were to blame for the poor game, noting most of the boys were just coming off an OFSAA appearance in volleyball.

Though Imaziah McIntosh managed to sink the most baskets for 17 Raven points, his field goal percentage lagged behind.

“He missed about 45 layups,” Kalanztzalos said. “So I don’t know if that was actually a good game for him.”

For Rams forward Shavar Graham, it wasn’t just a case of bad shooting causing the loss. There were also questionable calls from the zebras.

“We played well, but our shots weren’t falling and some calls were not what they should be,” he said.

“Last time we just did pure defence and I think you could see that in the game today,” he said of a previous practice. “We set it up defensively, only holding them to 45 points.”

“The coach said go for the boards, and I’m one of the smallest guys who can really jump that high — I have a good vertical,” Graham said. “So when I started crashing I’d get good rebounds but I’d come out and end up travelling.”

The short bench for the Ravens is a concern heading into the break for Kalanztzalos.

“You can’t foul,” he said. “We’ve already been in one game where we ended up playing with four guys in the end.

“We just sit back and they play. We’re conserving energy.”

But with the new year comes renewed optimism.

“We don’t have a game until after Christmas, so we’ll see what happens,” Kalanztzalos said. “It will be nice to have some guys back, but we might not.”

The win was Runnymede’s first of the season, moving them to 1-4 before the break.

“They have a good attitude out there,” he said. “It’s going to be tough, but we’ve got to play the game. They’re doing the best they can.”

Etobicoke is still looking for their first W as they sit with a 0-4 record. The fourth loss has them working on their scoring and floor strategy.

“We need to work on our offence in practice,” Chalmers said. “Last time we just did pure defence and I think you could see that in the game today.”