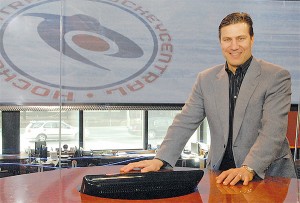 Nick Kypreos owes everything to the game of hockey.

That includes his home in Leaside where he lives with his wife, whom he met while playing for the New York Rangers, and their three kids.

With hundred-year-old trees lining the boulevards and the sounds of kids playing, Leaside, Kypreos says, is home.

“I think it’s just the community feel that you get,” says the Rogers Sportsnet hockey analyst. “It’s really hard to believe you’re 10 minutes from downtown and although you’re obviously still midtown there’s a real sense that you are part of a really close-knit, tight community.”

How he ended up in Toronto’s first planned community has its roots in the 1995-96 NHL season when he was traded with Wayne Presley to the Maple Leafs for Bill Berg and Sergio Momesso.

“It was a big thrill for me to get traded to Toronto,” he says. “It was a team I obviously grew up watching and worshipping.”

As a youngster, he lived in the High Park area, before his family moved to Willowdale.

Kypreos recalls somebody telling him he was only the 88th player in Leafs history to be born and raised in Hogtown and play for the Buds.

“I thought that was kind of cool because a team with such history, with so many players donning the uniform, that I would be one of less than a hundred that ever grew up in Toronto and play for the Leafs,” he says, beaming. “I thought man, those are incredible odds.”

When he returned home from the Big Apple, his sister called him and said there was a house up for sale in Leaside.

With nothing to lose — in the words of his sister —Kypreos took a look.

“Sure enough I saw it and then I wanted to buy it,” he says. “As they say, the rest is history.”

Years later when the Kypreos family needed some extra room, they did what’s only natural in Leaside:

“We literally bought the house across the street,” he says.

Though Kypreos shrugs off the saying ‘Buy in Leaside, die in Leaside,’ he admits, they do love the neighbourhood.

“Who knows what tomorrow brings, but today we’re definitely feeling like Leaside is our home.”

That feeling has a lot to do with his neighbours, he says, especially the parents at his kids’ school.

“I go pick my kids up at lunch and there might be 50 or 60 parents waiting for their kids,” he says. “We’re really committed to the schools in Leaside because the parents are committed to the programs.

“All those things are all community-driven and you can’t do that unless you’ve got some really good, supportive people around it.”

When it’s time for rest and relaxation though, some of team Kypreos’ favourite hangouts are just a walk away.

“Anything on Bayview,” he says. “Ever since the kids were big enough to be put in a stroller or wagon, we’ve gone up and down there.

“It didn’t matter where we had lunch, be it McSorely’s or Originals.”