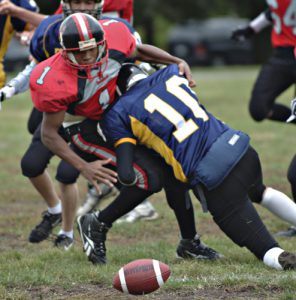 Lady luck was not cheering from the Forest Hill sidelines Oct. 7 as the Falcons lost a tight one to Newtonbrook 13-6.

An onside punt recovery, a blocked field goal return by the North Stars and a 15-yard penalty on the Falcons for unnecessary roughness all contributed to ruining an otherwise strong outing, said coach Ron Singer.

“When the defence shuts them out, you expect to win,” he said. “Two fluke plays. But we were happy (the game) didn’t degenerate into a shoving match.”

With under a minute left in the first half, a blocked field goal deep in the opponent’s zone led to a touchdown return by North Stars’ Jaleel Higgins. The play bruised the high-flying Falcons.

At halftime, Forest Hill coach Chris Parkin kept his charges’ morale up, and it seemed to instill some grit.

After recovering a fumble the Falcons’ offence went to work. Newtonbrook missed a sack attempt, which led to QB Alex Vasic speeding to the weak side for a first down.

Next play, Vasic found a wide-open Jesse Wiseblott, who ran the remaining 30 yards for a touchdown. A failed convert did little to down morale.

Another recovered fumble gave Forest Hill the opportunity to go on the attack again, but it proved fruitless.

It wasn’t until the fourth quarter that the Falcons fell silent.

Set up to return a Newtonbrook punt, North Stars’ Jovan Love stationed himself onside behind his kicker. After the punt he swept in almost unnoticed and jumped on a loose ball in the Falcons’ endzone for the score.

It was a strategy that finally paid off for the North Stars, said coach Shawn McIntyre.

“We have a lot of leaks and unfortunately we’ve gone through three different kickers in three weeks,” he said. “What we’ve been doing, because we’ve been having difficulty with our kicker … We line up a guy onside, which means he’s behind the kicker after he kicks the ball.”

Love was a stand-out player on both sides of the ball, McIntyre said, adding his rusher pounded the dirt for almost 100 yards.

Even though offence failed to shine, the win was evidence Newtonbrook’s game plan works.

“It’s been a long time coming. We’ve been working a few weeks on the same game plan because we were so far behind on getting started this year,” McIntyre said. “Our execution just needed to fall into place.”

With all the yards rushing, the Falcons defence still managed to shut down the pass, including a highlight reel interception in the second quarter by corner Jesse Wiseblott.

A duel player, Wiseblott also had a phenomenal game at receiver, compiling over 50 yards from quarterback Alex Vasic, including a long out that led to a touchdown.

Special teams’ Yotam Tabori chipped in with two blocks: a field goal and a punt.

With the loss, the Falcons drop to 0-3 on the season. They looked to get their first win Oct. 15 against Henry Carr. Results were not known by press time. Newtonbrook sought to reach .500 with a win over Weston CI Oct. 14, but were unsuccessful losing 37-0.