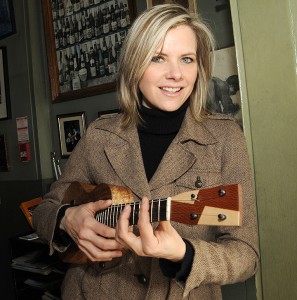 Picture a group of precocious children, all eyes and ears, gathered around singer-songwriter Melanie Doane as she strums the ukulele.

It’s not a far stretch of the mind as the chanteuse has taken up teaching the very program her father, famed musician and educator Chalmers Doane, started in Halifax when she was a child.

“I am basically a product of his program,” says the Riverdale resident. “It’s kind of a wonderful gateway, that program, for all music literacy and I’m now doing the program in a number of schools.”

The versatile uke can provide kids with the basis for melody, harmony, rhythm and even vocals.

“There’s no other instrument you can do so much on with small hands for $40,” she said.

One thing Doane didn’t expect was the joy instilling string rhythm into students at Wilkinson Junior and Withrow Avenue public schools would bring.

“I’m just loving watching my own kids at their school and other kids at other schools,” she said. “I don’t think I realized how much I would get out of it and how much it really makes me happy.”

Being a mother of two children, Rosie, 7 and Theo, 9, as well as a teacher absorbs her energy when she’s not performing music from her new album The Emerald City.

And a lot has changed since her previous release A Thousand Nights that provides plenty of material for reflection.

“I think a lot of the theme in this is the realization that you can’t go back home,” she said of The Emerald City. “There’s that moment that you have to deal with the past … and then move forward.”

Though A Thousand Nights was inspired by motherhood, The Emerald City is a personal journey for Doane, who reunited with songwriter Rick Neigher to create it. Neigher and Doane collaborated on the successful Adam’s Rib in 1998. Melanie’s brother Creighton produced the new album with her.

“It’s a story we all know and a metaphor we all know but it doesn’t leave you feeling like a super downer,” she said. “It makes you think, ‘Well there’s still a lot of good, sparkly, beautiful emerald going on.’

“That’s where I’m at right now, really stressing the positive.”

Why the talented Doane would look to chase away the blues with greener pastures is due to a change in home life.

“My long, 20-year marriage is not intact anymore and that’s a big thing,” she said, declining to go into detail. “It’s definitely reflected in this music.”

Though things have changed between her and writer-actor Ted Dykstra, Doane stays the course on the yellow brick road returning to her rock rhythms and velvety twang vocals on singles “Ruby Slippers” and “Sweet On You”.

But she will throw the occasional jazz piano and ukulele strum into the mix.

“You want to stay true to your own sound but as time goes on I realize I can stretch out and I love to do that,” she said.

Trips to Campbell River, B.C., London, Ont. and Hamilton are in the works, but a show at Koerner Hall is planned on May 14.

“I think the place where you raise your kids is a very important part of your life,” she said. “We made a real conscious effort to find a great spot (to live), we love the choice we made and our kids are thriving.”