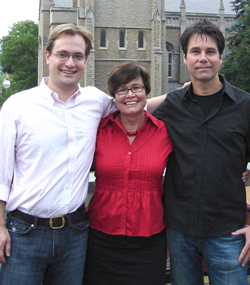 For riding association president Rob Newman, it was a chance to partake in democracy as the candidate will be chosen Aug. 12 by riding members.

“Every election is an opportunity for the voters to tell us what’s up with them and to evaluate the parties,” Newman said. “We’re happy with the record the Liberals have under Michael Bryant, and we think all three of these candidates would be fabulous MPPs.”

Hoskins, 48, co-founded War Child Canada, a charity bringing humanitarian aid to children of war-torn nations. He said what spurred him to run was his work with former foreign affairs minister Lloyd Axworthy as a senior policy advisor.

“I was a bit of an oddball in the sense that I was an activist and I had spent a lot of time working with communities and humanitarian issues in the field,” Hoskins said. “So I was able to bring that experience into play to apply it to various very important Canadian policies.

“It was a great opportunity and I worked for a great guy who is a real activist minister who had a lot of great ideas,” he added. “It helped me to understand for the first time in my life what politics can accomplish.”

Bringing plenty of government experience is 59-year-old Moses. She is a former federal assistant deputy minister of agriculture and has worked up-close with four prime ministers.

Born on the Six Nations Reserve just outside Brantford, Ont., she said she hopes to improve on Bryant’s track record.

Moses added that St. Paul’s MP Carolyn Bennett has had a big influence on her political aspirations.

“Carolyn is actually one of the people that twisted my arm to get me into politics in the first place and her style is one that I greatly admire,” Moses said. “Carolyn has been a tutor for me.”

For 33-year-old Finlay, the community in which he grew up in is important. He admitted the shifting economy is also a vital issue at the provincial level.

Another name that had been the subject of nominee speculation was Josh Matlow. He announced he wouldn’t be a candidate, saying it was important for him to follow through with his job as a school board trustee.

While he does support the Liberal party, he said he wanted to stay in non-partisan politics where he has more freedom, adding other levels of political action are too much like team sports.

“I don’t want to wear just one jersey,” he said, adding he is putting his support behind Finlay.

As for the other parties, no nominees have been firmed up yet, but Darlene Lawson, provincial secretary for the New Democratic Party, said her party has a few people in mind for the campaign.

“It’s moving along in a positive direction,” she said.

Once the interested parties make a decision, the NDP will hold a nomination meeting in September, Lawson said.

Calls to the Progressive Conservative party were not returned by press time.

Though the outcome of the St. Paul’s byelection will not alter the political landscape at Queen’s Park, Lawson said it’s an opportunity to hear what issues are important to voters.

A byelection is expected within the next six months.