Lauds opponent Mihevc, but has strong words for mayor, premier

If there is a lesson to be learned in Toronto-St. Paul’s, it may be that voters of the new Ward 12 will not be bullied into how to vote.

The endorsement accelerated a fire that was already burning in the ward. With Ontario premier Doug Ford’s decision to cut Toronto council, the two incumbents had to campaign harder and cover more ground to win votes in the single bigger ward that replaced their previous separate wards.

But there was no animosity on election night, as Matlow lauded his opponent, whom he called a social justice warrior.

“I also want to thank someone incredibly special, my friend Joe Mihevc,” Matlow said in his victory speech at the Midtown Gastro Hub in Deer Park.

Neither of the two incumbents wanted to find themselves running against each other, he said.

“We have a common foe, and that is a dishonest populist who is the premier of Ontario, who disregarded our local democracy, ignored our local charter rights, to settle scores and to demean the progressive, thoughtful voice of Toronto.”

It was a view that Erica Ehm, former MuchMusic VJ and close friend of Matlow, campaigning for him in his three council races, alluded to before the results.

“I think the issue is that no one is perfect and no one has all the answers,” she said. “You can’t bully people to vote the way you want them to.

“This is what politics is about. This is what the city council is about — to have a bunch of different people with different points of view to come up with solutions.”

In his endorsement, Tory said Mihevc was someone he could work with. Matlow and Tory had repeatedly clashed on the last council, especially over the Scarborough subway extension, which Matlow criticized strongly.

“Because Tory did that, to me it says that Josh Matlow was doing the job he’s supposed to do, which is standing up for what he believes,” Ehm said.

Tory’s endorsement of Mihevc came up in local candidate meetings as criticism of Mihevc.

Matlow won with 51.6 percent of the votes, compared to Mihevc’s 42.1 percent.

In his concession speech at St. Michael’s College School, Mihevc said he would continue to work on issues he cares about.

“I have deeply held values of how Toronto and Ontario should be, and those are values of inclusiveness, social justice and a passion for community,” he told reporters afterward. “I will continue those values wherever I will go.”

But he also said he had not established a Plan B in case he lost.

“My daughter’s in London. We’re going to rest and cocoon a little bit,” he told Streeter. “We’re going to figure out what the next steps are, and I’m okay with that.”

He didn’t know whether Tory’s endorsement hurt him, he said.

“It’s too early to read the tea leaves,” he added. “Frankly, I’m one for moving on. We fought a good fight. For 27 years we built some great relations and did some great things in this community.” 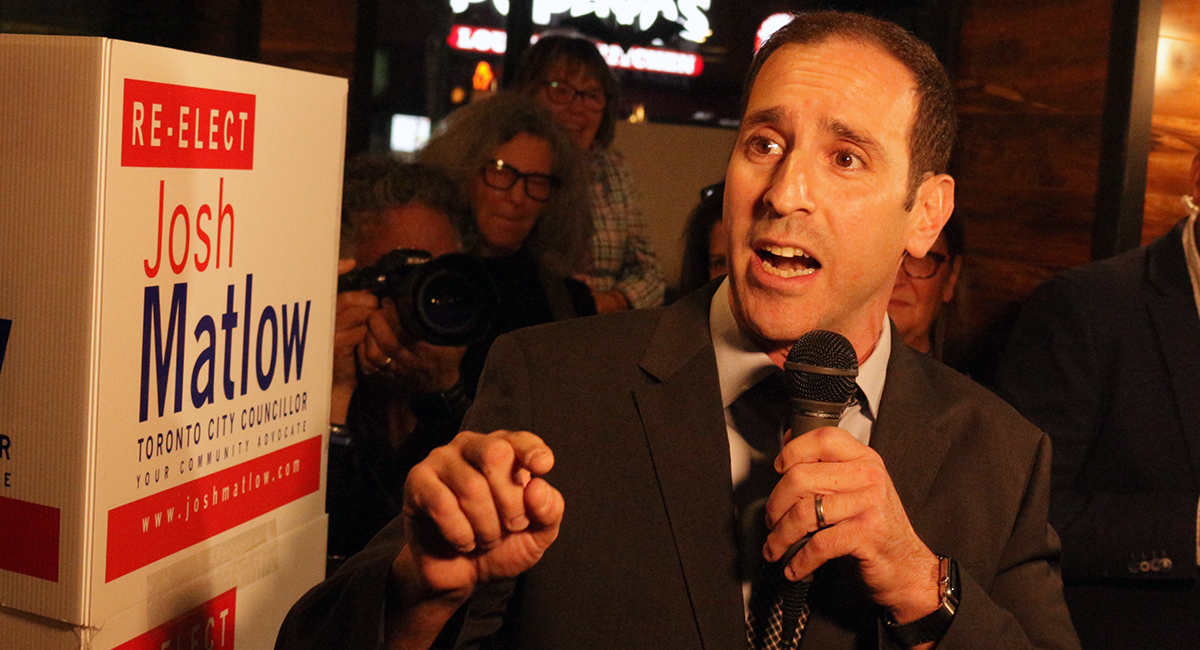 Matlow affirmed he will work with the mayor, but acknowledged disagreements are inevitable.

“I know that [constituents] want me to bring a thoughtful, fact-based, independent voice to City Hall,” he told Streeter. “I will work with the mayor when I agree with him, but also not be afraid to challenge him when I don’t agree because that’s what honest representation is about.”

Rounding out Ward 12 results were Joe Lipton with 2.4 percent of the vote, Elizabeth Cook with 2.3 percent, Bob Murphy with 0.9 percent and Arthur Langu with 0.7 percent.