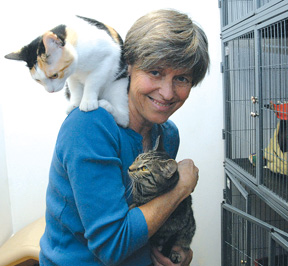 Heidi Yerashotis, founder of Homeless Cat Rescue, has made it her pursuit to help Toronto’s feral felines for the past 11 years, but don’t paint her with the “cat lady” brush.

The North York resident has joined forces with Pet Valu stores in midtown Toronto and Scarborough to find owners for homeless cats and collect food for the city’s hobo kitties.

And it’s not an easy task advocating for the mandatory spay and neuter bylaw at city hall that she said will solve pet overpopulation.

The simple fact is that people don’t want to foot the bill for their pet’s surgery, said Yerashotis.

“People get a free kitten, and that person is not aware of the cost it is to spay a cat,” she said. “They can’t do it, so they throw the kitten out.

“That kitten at that stage is not cute anymore, has a litter of kittens, and those kittens born outdoors are the first feral cats because they have had no contact with humans.”

Another hairball for Yerashotis is the cat lady stereotype.

“Any time you bring up cats people sort of go, ‘Oh, cats,’ ” she said. “It’s a huge stigma — people find cat owners are of the lower level. If you do cat rescue, the cat lady syndrome is displayed in the media, and the cat rescue groups aren’t like this.”

With everybody barking over off-leash dog parks, the city’s homeless cat population is ignored, Yerashotis added.

The Delisle Court Pet Valu in the Yonge and St. Clair area is one of the stores working with Homeless Cat Rescue, collecting food donations and providing an adoption centre for kittens who have been rescued from the urban wilderness.

Store manager Robert McCauley is enthusiastic about the process, but admits it’s a dilemma with no end in sight.

“You do get used to having them around,” he said of the store’s furry tenants. “They all have their own personalities, so they each have something about them that you like, or you don’t like, but you learn to like over time.

“But the best thing we try to keep in mind is that there’s over 5,000 homeless animals in the GTA,”” he added. “For everyone we find a home for, it’s like ‘Yay’, and then another one comes along that you have to find a home for — it’s a never ending battle.”

Many of those cats may not have to wait much longer to get help, as the city’s Animal Services department is doing the paw-work on a new mandatory spay/neuter bylaw.

Animal Services’ citywide manager Eletta Purdy said they are attempting to do a study of what the situation is around feral or stray cats in the community.

“We’ve looked at some of the bylaws out there on the other side of the border, just trying to get some ideas of what’s in play, how does it work, is it in fact achieving what it set out to achieve,” she said.

Animal Services also practices what they preach, sterilizing their own animals they are adopting out.

“So we’re setting the right example right from the get go,” Purdy said, adding they are also looking at the educational opportunities with the city and other interested stakeholders like veterinarian groups, pet food suppliers and more.

Though the results of their study won’t be expected until late spring 2009, she said she respected the work done animal rescue groups.

“I believe that the majority of cases, the intention is good, whether it’s always the right thing to do, it’ll vary depending on the circumstances,” she said.

“They’re out there capturing the feral cats and sterilizing and making sure they’re vaccinated so that the problem isn’t larger.”