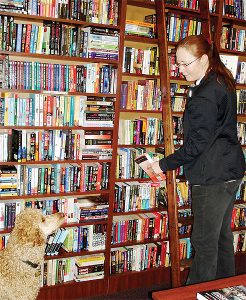 “It was a diamond all right,” Dashiell Hammett’s novel The Dain Curse begins, “Shining in the grass half a dozen feet from the blue brick wall.”

If talking about a precious gemstone in the middle of a lea, the Sleuth of Baker Street, all snug in its commercial strip along Bayview Avenue, would be the sparkle catching any private eye’s attention.

Whether you don Holmes’ deerstalker cap, Spade’s fedora or Miss Marple’s bonnet, there’s bound to be a few mysterious discoveries for the thrill-seeking, bookish type here.

But it’s the warmth and enchanting atmosphere, much like Harry Potter’s Flourish and Blotts that keeps proprietor Marian Misters happy.

“We work in here all the time, so we try to make it look like that country manor house library feel,” Misters says. “At one point we just thought we would hang up a bunch of chandeliers, and then I thought, ‘Oh no, I’d have to keep them clean’.”

She runs the novel sanctuary with former husband J.D. Singh. Both are chartered accountants and they purchased the shop 28 years ago when it was situated a little further south on the Leaside throughway.

“It was a two-line ad in the Globe and Mail that just said bookstore for sale,” Misters says. “We drove over. We walked in and it just felt right.

“Then we looked at the financial statements and said we shouldn’t,” she adds. “But there was just something about the place.”

After their first location, the Sleuth moved to 1595 Bayview Avenue, now home to a Second Cup. After some time at that spot, they moved again across the street to 1600.

They’ve been at their current cubbyhole for 15 years, with Misters residing above.

And owning the bookstore has been quite an enjoyable way to spend her time, says Misters.

“Imagine waking up every single morning and loving where you work? That’s the best thing,” she adds, “and obviously loving to read, I can read whatever I want, wipe the fingerprints off and put it back on the shelf.”

With the comforts of home, there’s only one thing missing. Like all famous detectives, there needs to be an amiable sidekick: the Watson to Holmes, the Sneaky Pie to Mrs. Murphy or the Asta to Nick and Nora Charles.

Enter Sir Percival — aptly named after the knight of Arthurian legend due to his Pendragon Poodles breeding — and he is hardly the hound of Baskervilles infamy.

He is the first canine to tally-ho through the stacks, after 15 years of cats. All of the Sleuth’s four-legged friends have names starting with the letter P and they all have prolific lifespans.

Misters can’t explain why the letter P is prominent, but she has an answer to the mystery as to why a pooch was purchased: she saw it in a dream.

Percy, as he is known in brief, can even read three flash cards Misters specially prepared for him.

But the long line of felines has not been forgotten.

Paddington, discovered as a kitten at Eglinton station, has a portrait above the cash register. Porky and Princess are found in photos inside the shop, and Poppy has been immortalized as the logo of the Sleuth, wearing a deerstalker cap and smoking a pipe.

“Before we used to have the Sherlock Holmes profile, and then we decided we’d put Poppy on every thing,” she recalls, adding Poppy was a great big, fat tabby.

Much like the cats before him, Percy loves the warmth of the spotlight. Though his services come with a voluntary fee: dog treats.

“There’s no point telling (customers) that we want scotch for Christmas anymore, they just bring dog biscuits,” Misters says, with a laugh.

But be forewarned: Percy has a solid schedule.

“If you read the little sign in the window, it says, ‘If you really want to see Percy, you have to make an appointment’, because people would come in and he wouldn’t be here,” Misters says.

Besides meeting up with bookshop royalty, it’s not uncommon for patrons to cluster around, much like an Ellery Queen denouement, and talk whodunits.

“We get a lot of people who are just going to dinner, they’ll come here shop and meet their friends here,” Misters shares. “It’s not as though it’s a gathering place, but I think people associate books with good things.”

She even shares an anecdote of how a couple met each other while at the Sleuth.

“A man and a woman came in carrying a tulip basket and said, ‘We would like to give you this’,” she recalls. “J.D. and I were here and said, ‘Why?’ Well they were standing in line to checkout and one of them started talking to the other about mystery books that they had in their arms, and one of them asked, ‘Do you want to go out for a coffee?

“Anyway they’re dating now. That was just last August,” she adds. “I thought, ‘You know this is what that’s all about’, there’s just something about it.”

That something draws people not just from Leaside but from around Ontario.

“We feel we’ve become a destination shop. People come to us to get mystery books,” Misters says. “They make an effort to come here because the parking is terrible and we keep bankers’ hours.

“And if I had a dime for everybody who came to see Percy, I wouldn’t have to sell any books.”

She looks to bookshelves with an expressive Sam Spade smile, knowing they hold the stuff that dreams are made of, then nods to Percy, who awaits his investigations of Bayview Avenue.