A tiny condo can still be a stylish space

Condominiums are on the rise and space is shrinking but when it comes to decorating, high-rise denizens shouldn’t avoid thinking big.

“What I tell people … is don’t be afraid to go bold because typically with people who buy condos they aren’t planning on living there for 20, 25 years,” said Isabelle Glinka, principal designer and founder of Lux, offers to clients through her Condo Quickie consults.“This is your place to have fun.

“It’s not a big space, so put money in the details (like lighting, window treatments and painting) because you will notice them.”

If an apartment faces north, it will get the most consistent light through the day. Going overboard with curtains, sheers or panels casts a shadow over a living space.

When the view is to the south or southwest, that’s when some diffusive sheers help.

“That’s a very nice thing for condos because … condos are very boxy now, and as years go by, they’re finding ways of making them even smaller and boxier,” Glinka said. “So, you have to find ways to soften up your space.

“If you put sheers across the whole wall from ceiling to floor, from edge to edge, even if your windows are not all the way across, then that, right away, is going to soften your space.”

Adding to the illusion that a condo is larger and softer in appearance are paint and wallpaper — but in moderation.

“Contrary to popular belief, painting all the walls white isn’t necessarily going to do it,” Glinka said. “What we often do is we suggest doing a focal wall.“So if you actually paint out or wallpaper one wall in a deeper colour or tone — and the rest of the walls in a lighter space — it’ll actually pull you into that space more, making it look larger.”

There are no hard and fast rules when picking a palette or colour scheme but most interior designers look for a source of inspiration within their accents like rugs or throw pillows. 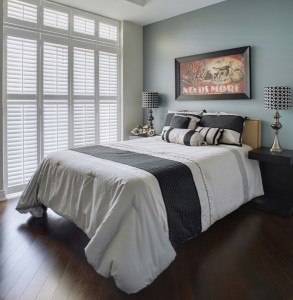 East York interior designer Carole Milon says it all depends on whether a client has a tabula rasa or a laundry list of furniture.

“If you’re moving in to a new space and you’re buying everything new then it would be best to start from the beginning and create it all at once,” she said the founder of Design Waves. “If you’re bringing objects from another space that are special … then you would take your inspiration from those pieces for finding your colour palette.

“In a small space, rules are meant to be broken, but generally speaking you might want to minimize how many colours there are.”

“Ideally, you do it all in one shot because you want to coordinate everything,” she said. “Pick out your main item, let’s say a sofa or let’s say you fall in love with a wallpaper — pick out those items and then coordinate the colours to match.”

And paint isn’t just meant for the walls.

“Ceilings do not always have to be white,” Milon said. “A way to keep the room and the lighting softer is to add 25 percent of the wall colour into the white (paint).

“Then you don’t get a harsh line of the white in contrast to the colour on the wall,” she added. “It breaks the room up and makes it more into a block as opposed to a more unified envelope.”

And when the sun goes down in the city, the next important part of small space design is the lighting.

Ambient, task and feature lighting are essential in both softening the condo’s appearance and ridding claustrophobic anxieties.

“Lighting always needs to come from more than one source,” Milon said.

Ambient lighting is the overall illumination of a space, but task lighting, according to Glinka, is the most important.

“That includes things like table lamps because you want to illuminate your space between the two and six foot level,” she said. “If all your light is coming from the ceiling, your creating certain shadows that you may not be aware of.

“So by distributing light in different locations, you’re giving it an overall glow.”

When it comes to feature lighting, something luxuriant will scare off the shadows and raise the roof.

“Feature lighting is super important because something like hanging a chandelier or an interesting light pendant above your table in a condo is what connects the ceiling space to the rest of the space,” Glinka said. “It makes you feel like the ceiling is higher because there is something there.”

That’s not to forget the base of the condo, as baring more floor will get you more space.

“Furniture with legs is always better in a small space because you can get to see more floor,” Milon said. “If you have chunky furniture that goes right down to the floor then you only see a small amount of floor space.”

Above all, don’t let the walls close in on you while decorating your cosy nook.

“Don’t be afraid to have fun with it,” Glinka said. “Add some personality.”