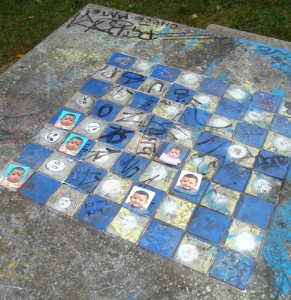 I was hoping a run-in with Jason Voorhees on my way to my apartment wouldn’t set the tone for my monthly walk.

Indeed a man donning the infamous goalie mask from the Friday the 13th saga cornered me on my street saying, “Hello my name is …” before I cut him off.

Believe me, on a cool, blustery day, it was the setting for an ill-fated trip to Camp Crystal Lake, and I wasn’t about to let my curiosity get the better of me.

Instead of a horror scene though, my jaunt was to the Annex. And it seemed a fortuitous cameo by Jason was only apropos to my starting point: the century-old Bloor Cinema.

With my MP3 player ripping out Nine Inch Nails — adding to the foreboding atmosphere — I plugged along.

The smell of burgers and shawarma filled the air as I made my way towards Albany Ave. North I went, paying close attention to homes heavy with brick flanking the street.

Just past the buildings a small parkette cast an eerie feel.

On top of grey chess tables, photos of babies were curiously strewn about in a checker pattern. With a quick gust of wind, the pictures blew and scattered into an empty flowerbed.

I half expected a hand to thrust itself through the earth followed by a low growl that would switch on fear like a remote.

With an about-face I skedaddled further up the street to search out well-known activist Jane Jacobs’ old haunt.

The homes were full of unique arbors, gables and architectural elements harkening back to Queen Anne style. I stood outside an Albany Ave. home where renovations were unfolding.

Yellow caution tape covered the deck entrance, all the while the Band sang, “The old neighbourhood just ain’t the same. Nobody knows just what became of Ophelia. Where have you gone?”

With the sound of maples and walnuts moaning I kept moving, lest a broken limb thicker than an elephant’s leg smite me.

I start passing plenty of telephone poles making like milk cartons with images of missing cats in the forefront.

Turning east onto Wells St., a bag floated on invisible forces, reminding me of a scene in American Beauty.

Sure, that caught my eye, but a postie running by with a jerry can drew my attention more.

My eyes left his sense of urgency as I passed Howland Ave. I noticed a heaving body in the back of a gold Subaru Forester.

A golden retriever was passed out in the back. Inside the car was a “Child on Board” sign stuck to the window, a small steel basin for water and nobody around.

I thought it extraordinarily crazed to have an animal locked in the hatchback.

Huey Lewis chimed in noting he wanted a new drug. However, the canine in the back was out cold — no sedatives required.

Hopefully the dog’s owner was on an errand and would be back to give it a walk at Jean Sibelius Square, just down the street.

But that too was vacant, like a scene out of Night of the Living Dead. A post-apocalyptic image of toys strewn about a playground with nothing but squirrels, pigeons and a gang of robins — ready to flee for the winter — around.

A poster of another lost cat, “El Calvino”, greeted me on Bernard Ave. as Chris Cornell rued, “Save me”.

Looks like the postie I saw running was saving himself as he loaded a car up with fuel, wiped his hands of gas and hopped in. He jetted off like a victim evading a zombie attack.

I keep going, passing over Spadina and deciding to turn south down St. George St.

My walk took me by the Chinese consulate.

Two activists stood outside protesting that nation’s persecution of Falun Gong. Styx’s “Too Much Time On My Hands” played, making me wonder if their cause was all for naught.

As my venture wound down, I came upon U of T’s Frat Row. To my left were the Phi Delta Theta, Phi Kappa Epsilon and Delta Kappa Epsilon houses, as well as the Delta Upsilon on the opposite side of the street.

They took me back to my days of university when I was invited to “Her Majesty’s Feast” at the DKE home. Basically it was a glorified food fight with a campus sorority.

Images of John Belushi flowed through my head screaming, “Food fight!” relinquishing any hold George A. Romero or John Carpenter had on me with their tales of undead and sociopaths.

Still, frat houses have all the makings of a macabre Halloween setting. Thankfully I didn’t run into Mike Myers as I escaped into St. George station.