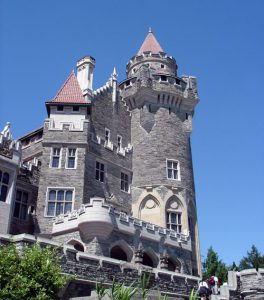 I’m on the inside looking out.

Two years ago when I started this column I toured the surrounding area of my favourite nook in the city: Casa Loma.

Every article thereafter I would discover a landmark and continue to wear my MP3 as the soundtrack of my wanderlust.

Now after two years of On the Beat, it’s being ushered off the Town Crier stage. Not that it’s too pedestrian, but it’s run its course — that and I’m running out of midtown landmarks.

So I decided to hang this beat up on Casa Loma, but this time from behind the stone façade.

Let me be candid, I’m not a city person. I could go into all the details but that’d be a hefty tome. Let’s just say I was born in a small town and spent most of my life being raised in the suburbs. Most people who venture to the city do so fleeing the burbs, but I miss my hometown Whitby and its quiet, mind-your-business demeanour.

Much to my surprise, while touring pockets of Toronto I learned there are slivers of wilderness and serene bubbles of residential areas cut off from the madding crowds.

Ironic though that for my last On the Beat, I bring myself indoors to a Toronto tourist mecca: bawling kids, madcap shutterbugs and guides with helpful smiles affixed to their faces.

I enter the Great Hall of Casa Loma to “Carry on Wayward Son”. Of course, the MP3 player remains on.

To my left, a bride and her groom gaze out a bay window situated in the wood-clad library. A photographer snaps shots of the bride, her train billowing out behind her as falls into her groom’s eyes. Eddie Vedder sings, “Alive”, and I am reminded of my own wedding nearing as fast as an Antarctic whiteout this September.

Down Peacock Alley I strut making my way to the conservatory. Marble floors, a stunning fountain, I stick out here remembering a scene from the movie X-Men, which was filmed in this very room.

I saunter back through the library via the dining room and then across to the study once occupied by Sir Henry Pellatt, Casa Loma’s builder.

One of the reasons why I love Casa Loma so much is it returns me to my youth. Two class trips brought me here.

Beside the fireplace I amble up the hidden passageway to the second floor.

Adhering Modest Mouse’s suggestion, I “Float On” through the Pellatt’s suites, snapping shots as I go.

Above a fireplace cherubs survey the lay of the room and in Sir Henry’s chamber, a lion is locked in mid-roar on the mantle.

I stride along the floor to the staircase that tour guide Rick Jarden once told me is haunted by a resident spectre.

Up I go, sans Scooby Doo gulp, and enter the modest servant quarters. Kept out of the rest of the room I swivel around and make my way to only the best part of the tour: the tower.

Scrambling up the steps many characters are etched, marked and written on the timbers.

As Carly Simon muses about being so vain, I keep plugging along, hitting the top of one set of stairs and noticing a ladder-less catwalk with a metal door.

Low beams signs warn venturers as they continue towards a cast-iron spiral staircase.

Up the rickety steps I ascend. Waiting briefly for the parade of height-seekers to part ways with another set of wooden steps.

As quickly as I targeted the tower, I descend like a cold pressure front to the bowels of Pellatt’s abode: the causeway to the potting shed and stables.

A dimly lit corridor winds its way beneath the roads above. Moisture slickens the path and fills the air. Cool dampness dances on my cheeks as pass more graffiti on concrete walls, signs and I-beams holding up the ceiling.

Skipping the gardener’s home, I climb the steps into the horse paddock.

Apt to hanging up the reins, I end my sojourn and column in the stable. Tile with the webwork of age splintering the ceramic adorns the walls. The stalls vacant, but not without evidence of their past denizens.

It’s time to hoof it back home.