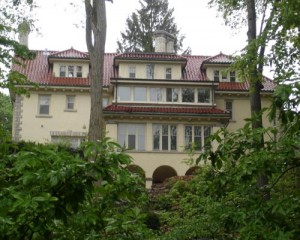 It’s your typical rainy British day as I amble up the hill to Sir Winston Churchill Park in the northern tip of South Hill.

I’ve picked this spot of course because our Head of State’s country just got hung. Well their parliament did, and I figured I’d take a trip to one of Toronto’s parks aptly name for UK’s legendary prime minister.

As Dirty Vegas’ “Days Go By” floats through my headphones, a few lonely souls jog the track, oblivious to the sky’s watershed.

Within the grassy turf a congregation of European starlings and robins wrestle with surfacing worms. To my south, one of Casa Loma’s towers emerges from the tree canopy.

Further along the fine gravel path, behind the avian predators, the tennis courts sit idle slickened with a watery glaze.

Beside, a designated off-leash area plays host to only a few blackbirds strutting Egyptian like across terrain in search of quarry.

Edging the reservoir, into the ravine I spy an orange and blue tent in the bushes. To my left an old concrete circle from an old a building. I discover stairs descending into the abyss where a huge antenna tries to touch the sky like Babel.

I mumble to myself in my own foreign tongue, and pass through a walk between two homes just beyond the beacon while Paul Rodgers of Bad Company tells me it’s all part of his “Rock and Roll Fantasy”.

I emerge onto Russell Hill and head south deeper in the depths of the gully. Outside British-style cottages, flowers cascade to the boulevards. Tulips and some plants I cannot place burst into blues and purples.

One home’s enclosed entrance has a chief welcoming guests. As I eye the luxe homes, a crossing guard walks by me in a hyper-orange slicker.

I resist the urge to use my dad’s line, “Do you have batteries for that?” only nodding and saying hi.

As I venture closer to Boulton Drive, Little River Band tells the tale of a lonesome loser, and I can’t help but feel a little dampened as I pass a large gated home.

Veering south again, the lilacs I pass paste the insides of my nose with their aroma.

The English vibe throbs along with Journey’s “Anyway You Want It” as I continue along treading through the rivulets of rainwater.

I tread the entrance to Roycroft Park. Backing onto the pathway is a mansion that takes my British theme on a vacation to Majorca.

A light-mustard hued hacienda with umber clay roof burst through the spot where trees were. While I pick my jaw up off the ground I proceed further along Boulton to where it meets Poplar Plains Road and MacPherson Avenue.

By this point I’m feeling a little disoriented finally realizing I’m at the Dupont and Davenport. The Designer’s Walk is before me.

Perhaps Britain’s David Cameron can come to pick out the fabrics and lighting for his office, if he does indeed end up at #10 Downing Street.

On that note, much like Gordon Brown’s political career, I’m all wet.

Time to seek some shelter from the storm and dry off.