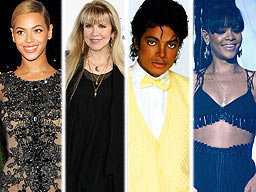 Madge seems to think so as she has taken numerous shots at Gaga over the past few weeks. But even a small part of a song has the chance of sounding like another. The Rolling Stones realized this when they released “Anybody Seen My Baby” in 1997 on their Bridges to Babylon album.

The song’s chorus sounded like Canadian singer k.d. lang’s “Constant Craving”. Even though the similarities were coincidental, the Glimmer Twins gave a song-writing nod to Lang.

Gaga has not extended the same courtesy to Madonna or Stephen Bray, co-writers of “Express Yourself”.

Still, with the rise of mixing and mashups, it’s not unusual for someone to identify a bridge or refrain of a new song as something borrowed. For the most part, the sampling of a song is approved by the original writer.

That’s a familiar process to satirist ‘Weird’ Al Yankovic. For every song he re-writes the lyrics to, he has to get the green light from the original artists. He received Madonna’s approval for “Like a Surgeon”, a satire of “Like a Virgin”, partially because Madonna herself suggested it. He also got the go ahead to spoof Lady Gaga’s “Born This Way” with his song “Perform This Way”.

More serious adaptations of other songs include Alicia Keys sampling Prince’s “Purple Rain” in her song “Like You’ll Never See Me Again” and Burton Cummings of the Guess Who having his vocals on “These Eyes” mixed into Maestro’s “Stick To Your Vision”. Even Janet Jackson has borrowed music, using America’s acoustic guitar riff from “Ventura Highway” on her 2001 song, “Someone To Call My Lover”.

Here’s your chance, readers, tell us who you think did the riff more justice in the following six songs:

“Kashmir” – Written by Jimmy Page, Robert Plant and John Bonham. Recorded in 1974 by Led Zeppelin. Sampled by Mark Curry and Sean ‘Puffy’ Combs on the 1998 song “Come With Me”, off the Godzilla movie soundtrack.

“Werewolves of London” – Written by LeRoy Marinell, Waddy Wachtel and Warren Zevon. Recorded in 1977 by Warren Zevon. Sampled by Kid Rock along with Lynyrd Skynyrd’s “Sweet Home Alabama” on his 2008 hit “All Summer Long”.

The Sun will follow up with the results of the polls in a week.