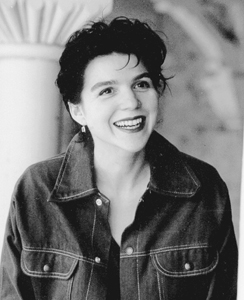 No one will ever care about your writing as much as you do, says novelist Elizabeth Ruth, so that’s why it’s vital to let the laundry and dishes pile up.

Leaving a demanding 11-year career as a counsellor in frontline mental health, the Beacher has spent the past decade devoted to her writing, sacrificing her social life, recreation and household chores.

“I’ve had to turn down a lot of friends, and sometimes people have had to adjust their expectations of me, because I’ve had to say, ‘I can’t come out and play’,” she says, joking her house isn’t as clean as she’d like it to be.

But dedication has paid off with her two novels Ten Good Seconds of Silence (2001) and Smoke (2005).

Ask her how she ventured onto the path of Canadian literature and she’ll say it was a conscious decision, choosing to write full time instead of trying to fit it in around the schedule of her day job.

And the ink flowed faster after she applied to the two-week summer workshop at the Humber School for Writers almost a decade ago.

“That was the first time I had really been immersed in an environment where there were professional writers,” she says. “I kind of went there looking for a sign as to whether or not the work I had been struggling on was worth anything.

“I felt like it was taken very seriously by my mentor and that just inspired me to continue.”

Her mentor of course was none other than the late Canadian literary icon and novelist Timothy Findley. Ruth had selected Findley because the theme of sanity in his book Headhunter was the inspiration for her novel Ten Good Seconds of Silence, a book also dealing with mental health.

And Ruth laughs when remembering the ultimatum she gave Humber in order to get Findley as her teacher.

“You’re actually supposed to select a first, second and third choice mentor, but I didn’t,” she says. “I only selected him, and I remember writing a letter saying, ‘If I can’t come to work with him, I’m not going to come’.”

But she did end up with the literary icon, and after her two weeks were over, Findley continued to offer his frankest of criticism outside the classroom.

“I would send him chunks of my writing and he would write back with his very honest, not-pulling-any-punches commentary,” she says. “He would be direct with what he thought needed development or what was working well, but his delivery was gentle.”

And she’s modest about the time “Tiff” — his nickname based on his initials — took to work with her.

“I don’t want to make that sound terribly precious, he was known to have helped a lot of writers,” she says. “And there are a lot of younger Canadian writers he did help on the side, taking his own time reading our work and (commenting) on it. I was just lucky to be one of them.”

The fact that Findley helped young writers is something Ruth says goes unnoticed.

“I think maybe people don’t realize Canadian writers, even our Governor General award winners like Tiff, were still teaching and still involved in the wider literary world as opposed to just sitting in their room being isolated,” she says. “So for me, I got to see that it was really important to be involved in the world.”

She’s now passing down what she has learned to other aspiring authors by being a writer-in-residence at the Oshawa Public Library in January, teaching courses at the University of Toronto and Humber College, all the while raising her 11-month-old daughter.

How does she balance it all?

“Because I have this history of being very disciplined, I am able to turn it on when I need to and move seamlessly from ‘Okay, she’s napping now, I’ve got 40 minutes’.”

Ruth’s schedule was originally 9 to 5, but now it’s whenever her daughter is asleep, usually from 8 p.m. to 2 a.m.

With the hands of the clock ticking away, she’s not at all concerned losing face time with her writing, she says.

“(Tiff) used to say, ‘Don’t be afraid of time,’ and I think that has really stuck with me,” she says. “Books take time and people take time to become mature enough to write books.”