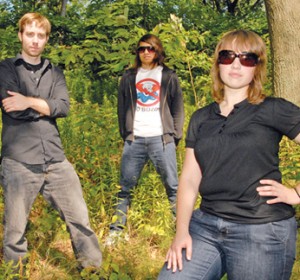 An hour before an August performance at The Boat in Kensington Market, drummer/vocalist Wendy Fowler with guitarists Tim Okura and Matt Wearn sat down to speak of their modest South Kingsway beginnings.

They say they found common ground on rockabilly rhythms, surfer music, B-movies, taxidermy and zombies when they were college students.

And the bond has endured for over a decade.

“We’ve known each for so long, we’ve spent so much time around each other, that I know what they’re thinking before they’ll say it, and it’s the same thing with a song,” Wearn says. “We don’t even talk about it, we just play something.”

Roommates throughout college, the three stumbled into their music origins while playing around at the Rehearsal Factory at Bathurst and Richmond Sts.

“We weren’t really playing in a band, it was more like, ‘Wow, we can play louder now,’ ” Okura says.

“Just make a lot of noise, which is what we like to do,” Wearn adds. “Lots and lots of noise.”

Discovering that Fowler had rhythm led them to being offered more time to exercise their yen for surf beats at the Factory.

“Tim and I would always talk about wanting to be like a sonic surf band, and that was the dream, and then Wendy started playing drums and she just played surf beats constantly,” Wearn says. “That’s all we needed.”

Fowler shrugs, admitting she played a bit in high school after she switched from her “boring” bass to percussion.

She laughs when she recalls their early jam sessions at the Factory.

“We were borrowing the drum kit of a band (there) at the time,” she says. “So every time there was a knock on the door, ‘Uh-oh, I’ve gotta get out of this drum kit.’

“It was nerve wracking for the first little while because I was too shy to ask to borrow it.”

Then came Fowler’s B-52s-style vocals and the band was complete, save for a name.

That’s when Okura’s knack for keeping journals came in handy.

“There was nothing we could agree on,” Fowler says with a giggle, adding Okura writes random notes in his “books” for use in christening songs or bands.

“Trying to find a name is so hard,” Fowler says. “Our very first name was Fort Lauderdale.”

“But then we found out that there was another band called Fort Lauderdale, so we changed that,” Wearn says, adding that they tried all kinds of names including Alhambra Possum and Hobo Lunchbag. They ended up looking to The Simpsons and Friday the 13th for inspiration, coming up with the name Terror Lake.

“We like that kind of stuff,” Fowler says. “Nature and taxidermy and weird stuff …”

The band has scared up a following since their first gig at the Gladstone Hotel eight years ago, which Fowler admits was an embarrassing moment.

“Every single family member, every friend was there. The place was packed,” she says with a laugh. “They clapped after our sound check. It was really embarrassing because they’re like ‘Yeah!’ ”

Kith and kin hijinks aside, the band has one last issue to resolve.

“The only problem with Terror Lake is people tend to think it’s Terra Lake,” says Fowler. “It’s actually a hard name to pronounce (at shows).

Okura playfully reaches out with his hands clawlike.