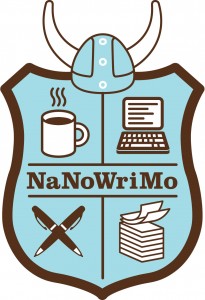 And so it was decided, one afternoon before meeting up with a couple of mentees of mine, that I would partake in NaNoWriMo, otherwise known as National Novel Writing Month.

I’m a U of T alumnus, and New College was my home during five years of university. Now, I’m not one with a heck of a lot of money, so instead of donating cash to my alma mater, I offer my time — which in all honesty is more valuable.

I’ve been mentoring two great students, one a recent graduate, and we’ve been chatting about writing, editing and the industries to require such talents.

It’s also been a boost for me, giving me that extra push to write, albeit nothing’s been put to paper beside notes, and a couple of quickly scrawled scenes.

I haven’t partaken in Nanowrimo since 2007. Back then, I probably had more time to spare on writing. And scheduling was not so sporadic.

Media watched: Friday the 13th, Part 2; Halloween 3: Season of the Witch; The Raven; Halloween 4: The Return of Michael Myers.