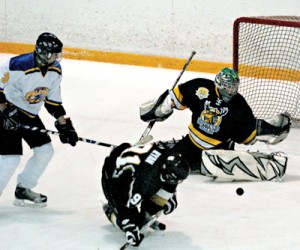 It took five periods of play for a winner to be determined in South Region boys hockey quarter-finals Feb. 23.

Skating on fumes, the Leaside Lancers managed to connect for the game winner from Michael Holder, who sniped a behind-the-net pass from Mike Kampoulos past Forest Hill goalie Adam Kimel for the 3-2 victory.

For Holder it was the end to a tough 49-minute grind-out.

“It felt pretty good. It was the end of the game, I was tired and I just took the shot and it went in,” he said. “I was just thrilled that the game was over.”

It was close for the entire game. Lancers coach Peter Shier said that Forest Hill was able to hold Leaside off the score sheet through the first period of play due to Kimel’s outstanding performance between the pipes.

But he also lauded is own goaltender Sean Ryan, who provided the turning point late into the game.

“In overtime where the guy had a wide-open net and Ryan kicked out his foot and robbed him,” Shier said. “The whole bench just went crazy.”

The Lancers had two goals in the second: one laser beam point shot from defenceman Mike Lansdowne via Gord Small, the other a wrap-around from Jordan Wright, the scoresheet showed a different third period.

Too many penalties gave the Falcons a chance to get back into the game, as Adam Anshan scored both Forest Hill goals on the powerplay.

Forest Hill coach Ed Ketchum was pleased with the strong play his sixth place charges brought to the rink.

“They went out there with a positive attitude and didn’t get down on themselves after being down two goals,” he said. “They had incredibly good team play.

“They kept pressing Leaside and came out in the third period determined to use every last ounce of energy.”

The Falcons might have lost in the South Regions, but Ketchum was hopeful his team would qualify for OFSAAs in St. Catharines due to the small size of the school.

Leaside’s next match was against Humberside Huskies Mar. 2. Results were not known as of press time.

That game has Shier concerned, especially when it comes to two-minute trips to the sin bin.

“One of the things I have been talking to the kids about is not taking penalties because it hurts you,” he said. “It hurt us in this game and it hurt us in the second last game too.

“It was our game against Humberside. We took some stupid penalties, got behind and we couldn’t fight back,” he added. “I think the lesson there is to try and stay out of the box because the other team certainly gets an advantage.”