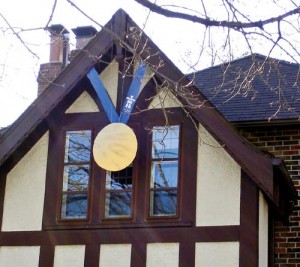 “Welcome back my friends to the show that never ends,” Greg Lake sings, “We’re so glad you could attend, come inside, come inside.”

The Eglinton Way is certainly experiencing a carnival atmosphere as I hop off the bus at Avenue Road.

Toronto’s sentry of CN acts like the centre pole for the outdoor big top, on a pristine day emulating spring.

Midtowners with their dogs, strollers and Starbucks flood the streets, flowing like tidal wave across the concrete.

Stores feel the tide as I pass by Yitz’s Deli and Oink Oink on my way to the landmark Oliver’s Jewellery.

This is my starting point, as Level 42 hums to me, “Something About You”.

Oh yeah, there’s definitely something iconic about Russell “Cashman” Oliver. His mug firmly affixed to the front entrance that requires a buzzer to get in.

Empty windows have signs of “Coming Soon”. An LCBO looks to inhabit the south side while a painter, stroking on scarlet to door frames, prepares Fat Cat for the public.

That’s the only evidence of felines I see though, as more pooches pass me by. Spaniels, chows, poodles and labs take in the fresh air under the Eglinton theatre marquee.

Filling their environment is the spicy smell of cinnamon. It’s intoxicating, and the source is Phipps Café. Much like the robin’s arrival, patio chairs and tables are an early sign that spring is in bloom.

Outside a flower shop, a sheltie yaps for it’s owner, and Imogen Heap of Frou Frou muses of letting go.

Just before Heddington Avenue, I say hello to Linda Van Den Brink who is out walking her two poodles Endo and Eloise with Etienne DeVilliers.

Much to my woe, my digital camera craps out on me.

Still, I thank them for their patience and depart their company making my way north into the heart of the residential nook where Lytton Park skirts Allenby.

A mom walks down a street of Tudor style homes jubilantly singing songs with her tweenage daughter.

While “Steal My Sunshine” by Len plays, kids enjoy their scooters and hockey on the sidewalk.

All the homes along the street have beautiful front doors — portals to the microcosmic worlds inside.

On the paths leading up to the steps, rivulets of melting snow make their way to street level. Shovels stand on porches like cranky neighbours telling the snow to get off their lawns.

I make the rounds along Roselawn Avenue to John Lennon’s “Watching the Wheels”.

I turn south along Castlewood and am slightly disoriented because of an uphill climb heading south.

The street is quiet, but not without life. As I re-approach Eglinton, I notice a man digging in the dumpster behind the Harvest Wagon.

Back to the main drag I hear a middle-aged couple chatting with two young women about wedding plans, realizing that my own nuptials are in six months.

But never mind that expensive thought. I leave the street to grab a coffee just as my journey started it ends: talk of carnivals.

Though it’s not Emerson, Lake and Palmer, playing inside is Natalie Merchant’s “Carnival”.

Serendipitous? I think so.