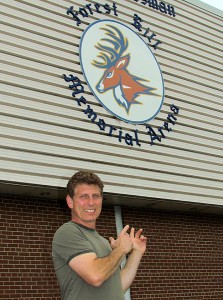 A string of kids exits the doors of Larry Grossman Arena, laughing after their figure skating camp.

Inside, a cool retreat from the summery heat, boys skate around pylons on the main ice pad.

Arena manager, Tim Macri, surveys what’s to be done next but not without chatting about the rink’s new face.

Overlooking Chaplin Crescent, the circular emblem of a stag loping through laurel, synonymous with Forest Hill, is now gone.

Its replacement is modern artwork of a stag’s profile shot.

What prompted the change?

Much like a Zamboni rejuvenates the ice surface, logos need a facelift every once in a while, Macri said.

“It’s been up for many years,” he said. “It’s weather beaten, kind of ragged and not something you want on the side of the building.”

The idea first sparked last summer when Macri, along with staff, brainstormed for a centre ice concept on the main pad.

“The guys and I got together and decided we needed something different, something big and impressive for the facility,” he said. “We sat down, drew up a couple of designs and sent them to the group who does our ice decals.”

With centre ice as the centrepiece for discussion among Forest Hill’s ice denizens, the next step was to get the okay from the board of management for the outside emblem to be born anew.

The answer was yes, and installation was set for the winter, however inclement weather impeded it. Still, by mid-July the stag’s head was up.

“It was a big hit with everyone,” Macri said.

Keeping with the Forest Hill Hockey Association, just celebrating 50 years in 2010, the colours of gold and blue are predominant along with the burnt sierra of the buckskin.