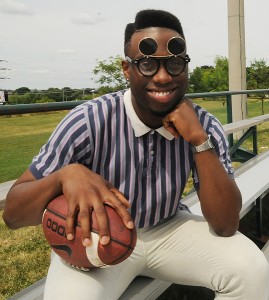 This one is for Rohan Ramsay’s mom.

His mother Rachael, almost fully recovered from an aneurysm and subsequent stroke in August 2010, gave him the inspiration to audition for The Score’s Drafted 3.

She had been confined to a wheelchair, unable to speak, but since mid-July she conquered those obstacles and had her tracheal pipe removed.

“I would say at this point most of it has to do with my mother,” he said. “She’s been in the hospital for the last year and so it would be cool to do this in ode to her.

“This is where we connect mostly.”

Born in Toronto but raised for a time in Grenada, Ramsay’s mom was the one who introduced him to the sporting life.

“I grew up with just my mother and she was a huge sports fan,” he said. “If you have your mother yelling at the TV, when you’re five and six you’re going to wonder why.

“Those things are the same things you become passionate about.”

Now as a top 10 finalist on the Score’s latest sportscaster search, he’s able to fulfill the tribute to his mom.

His fateful journey to the Eaton Centre for the network’s next sportscaster search began from his home in the Dufferin Street and Davenport Road area on bike.

The long trek on two wheels allowed him to clear his mind.

With the addition of a submitted video audition, at the “behest of last year’s winner”, Brent Furtney, the wardrobe stylist, donning a jaunty Panama hat, is ready to reveal his inner sports fan.

Greg Sansone, Score anchor and judge for the Drafted series, says he is excited to see how Ramsay and the other nine contestants react when they’re on the hotseat.

“What I love about Toronto sports fans is this pent up frustration of a lack of success we’ve had for so many years,” he said. “When you get … the people who are most interested in Drafted participating — we’re talking about kids who have never seen a championship in this city  — that is pretty amazing.”

Drafted’s previous two winners Paul Brothers and Furtney hail from Newfoundland and the Niagara Peninsula respectively, so for Ramsay it would be great to bring home a title for Toronto.