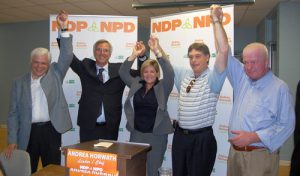 “This is a unique opportunity for the residents of St. Paul’s to be able to pick the best candidate and the best party without worrying about who’s going to be in government the next day,” he said. “Often people are trying to decide the whole provincial election through their one vote in their community.

“This time it’s going to be about community concerns on who they can trust to best represent their interests and concerns at Queen’s Park.”

Elected on the first ballot with 73 votes, it’s the third time Heller has run provincially, finishing in third both in 2003 and 2007 behind the Liberal and Progressive Conservative candidates.

“We’ve made a lot of connections with the community in those campaigns and we look to build upon that foundation with an even better campaign,” he said. “We’re working to have the honour of being MPP for the people of St. Paul’s at the end of this.”

Heller highlighted some main concerns of constituents were funding for public education and investing in public transit.

“We need to ensure that our schools are properly funded so that we don’t lose our community pools, our music teachers, our full-time librarians, which has been going on unchecked under the McGuinty government since 2003,” he said.

Public transit, including the St. Clair LRT, are necessary but Heller admitted the businesses have long since suffered since construction began.

“We all want improvements to public transit, and this is a good idea, but there’s no question that the shopkeepers and the adjacent neighbourhoods have been suffering for far too long,” he said. “While we all say that we need to have investment in public infrastructure we also have to start addressing the people who are living in those parts of the community to make sure their businesses can continue to thrive.”

Running against Heller will be the Liberals’ Eric Hoskins, Sue-Ann Levy for the Progressive Conservatives, Chris Chopik from the Greens and Paul McKeever for the Freedom Party.

The St. Paul’s byelection is set for Sept. 17 with advanced polls running from Sept. 8-10.