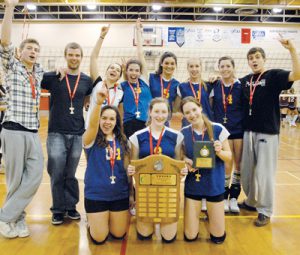 It was the battle of teacher versus student at the senior girls volleyball South Region finals Feb. 17.

Lawrence Park Panthers coach Jessica Fernandes was taking on her volleyball coach Edgar Kirss 10 years after she played for him with the Humberside Huskies.

The reason for success: teamwork.

“They really stayed together as a team,” she said. “They never got down on each other, they helped each other out where they needed to. That’s what worked for us.”

Additionally, Fernandes told her Panthers it was vital to take an early lead.

“The most important thing was to win those first few points to get out on top and that’s what they did.”

“Both (Wolf) and (Stephen) played awesome at the net,” Fernades said. “They were on their game.”

“They were both playing really, really hard.”

The win catapulted the Panthers into the quarter-final OFSAA qualifying game for the citys Feb. 19 where the Panthers savaged the Spartans 2-0 (25-16, 25-12).

Fernandes’ optimism that her crew would come out on top was well placed.

“It’s at our school so hopefully everyone shows up and plays the same game,” she said. “We practice tomorrow (Feb. 18) morning so we’re right back into it.”

The loss handed to Humberside doesn’t mean they are eliminated from OFSAA contention.

They qualified for the citys as well, facing Martingrove Feb. 19. Head coach Edgar Kirss was positive his young troupe could pull off an upset, but only if they regain their confidence.

“I think some of them have taken a step back from last year today, and they don’t believe in themselves and they doubt themselves,” he said. “They just have to react.”

“I think we just wanted it as much as the other team,” she said. “I just didn’t think it came through for us.”